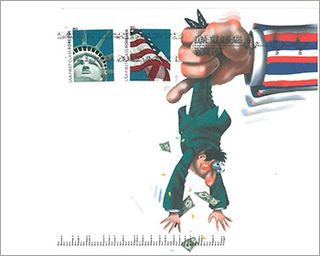 The FTC alleged that Archie Donovan and his two companies – National Attorney Collection Services, Inc., and National Attorney Services LLC – used English- and Spanish-language text messages and phone calls that illegally failed to disclose that they were debt collectors.

The FTC also alleged that Donovan and his companies illegally revealed debts to the consumers’ family members, friends, and co-workers. Among other tactics, the defendants used mailing envelopes picturing a large arm shaking money from a consumer who is strung upside down.

The law doesn’t allow debt collectors to disclose publicly someone’s private debts, because doing so could endanger their jobs and reputations, the FTC said. Mailing envelopes can include only the name and address of the company and can’t indicate that the consumer may owe a debt.

Debt collectors can use text messages to collect debts, but they need follow the law and protect consumers’ privacy.

In addition to the $1 million penalty, the settlement requires the defendants to stop sending text messages that don’t include the disclosures required by law and to obtain a consumer’s consent before contacting them by text message.

The defendants also are barred from falsely claiming to be law firms and from falsely threatening to sue or take any action – such as seizure of property or garnishment – that they don’t actually intend to take.

This is the first FTC action against a debt collector who used text messaging to attempt to collect debts.