Home About Newsletter Categories Donate
FDA allowed use of antibiotics in animal food, ignoring its analysis of ‘high risk’ to humans, documents show
Recall of the Week: GE brand dehumidifiers due to serious fire and burn hazards 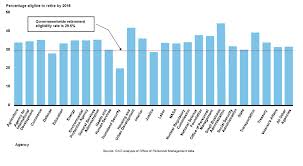 The large numbers of federal employees eligible for retirement in the coming years may be cause for concern, according to a report by the General Accounting Office.

The wave of employee retirements along with current budget and long-term fiscal pressures could produce gaps in leadership and institutional knowledge that could threaten the government’s capacity to effectively address these and many other evolving, national issues, the GAO said in another report.

Government-wide, about 30 percent of federal employees working on Sept. 30, 2011, will become eligible to retire by 2016.

At some agencies, however, such as the Department of Housing and Urban Development and Small Business Administration, at least 40 percent of those working on Sept. 30, 2011, are already eligible or will become eligible to retire by 2016.

The GAO has labeled this retirement wave as a high risk issue, because more work is needed to carry out corrective strategies to address skills gaps and evaluating their results.