With my weight and blood sugar levels rising, weight-loss ads look tempting. But, I’ve been writing about consumer issues long enough to know that most are scams. 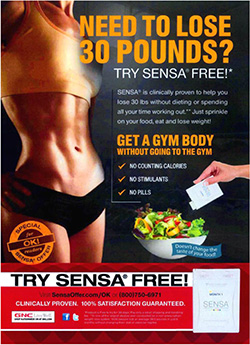 The Federal Trade Commission announced a crackdown Tuesday on marketers that use deceptive advertising claims to peddle fad weight-loss products, from food additives and skin cream to dietary supplements.

The marketers of Sensa, who urged consumers to “sprinkle, eat, and lose weight,” will pay $26.5 million to settle FTC charges that they deceived consumers with unfounded weight-loss claims and misleading endorsements. The agency will make the funds available for refunds to consumers who bought Sensa.

The agency also announced charges against the marketers of two other products that it said made unfounded promises:

“Resolutions to lose weight are easy to make but hard to keep,” said Jessica Rich, director of the FTC’s Bureau of Consumer Protection. “And the chances of being successful just by sprinkling something on your food, rubbing cream on your thighs, or using a supplement are slim to none.  The science just isn’t there.”

The weight-loss marketers will pay a total of about $34 million for consumer refunds.

In addition to the $26.5 million to be paid by Sensa, L’Occitane Inc. will pay $450,000 and the LeanSpa settling defendants will surrender assets totaling an estimated $7.3 million. The judgment against the HCG Diet Direct defendants is suspended due to their inability to pay.

See “Sensa and Three Other Marketers of Fad Weight-LossProducts Settle FTC Charges in Crackdown on Deceptive Advertising” for details on these weight-loss “programs.”

This is very true about supplement companies promoting their product in falsified ways to get results that people are seeking for.