Home About Newsletter Categories Donate
You or a family member struggling with college or other debt? Tell agency about it
Consumers exposed to possible cancer risks in many soft drinks, consumer group says

I don't know about you, but I'm really frustrated by shopping for the new light bulbs. I haven't been satisfied with the performance of the compact fluorescents that I've purchased and worry about cleaning up the mercury if they break.

Fortunately, I don't have any carpet, so I wouldn't have to cut out a square if one broke on it in my home.

And halogens? I don't know if they're safe. I bought some because I didn't realize they were halogens and took them back to the store.

Then there's the LEDs.

Federal action this week against a company that made false claims about their LED light bulbs sheds some light on the subject.

Here's a report on the claims the company made, where to look to get a refund, and tips on how to buy the new light bulbs:

A federal court has ordered a light bulb manufacturer and its owners to pay more than $21 million for misleading consumers by exaggerating the performance of their LED light bulbs.

The company, Lights of America Inc., sold the bulbs in big box stores including Costco, Sam’s Club, and Walmart. 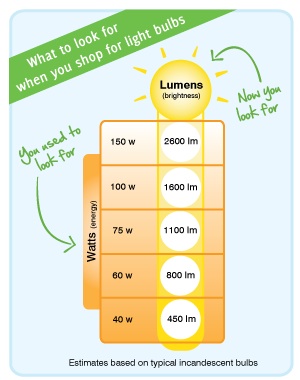 The court order announced Thursday requires it to pay $21 million to the Federal Trade Commission. Most of the money will be used for consumer refunds.

Check the FTC’s webpage, Recent FTC Cases Resulting in Refunds, for information on how to get a refund. The details haven’t been posted yet, but should be soon.

In September 2010, the FTC charged Lights of America Inc., Usman Vakil, and Farooq Vakil with violating federal law by overstating the light output and life expectancy of their LED bulbs on packages and in brochures, and falsely comparing the brightness of their LED bulbs to other light bulbs.

In September 2013, the court found that the FTC had proved its case and that the defendants were liable for deceptive marketing.

So best wishes shopping for the new light bulbs. For information about light bulb performance, see the FTC’s Shopping for Light Bulbs.