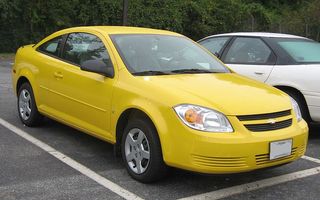 General Motors said Friday it will replace the ignition switch in all model years of its Chevrolet Cobalt, HHR, Pontiac G5, Solstice, and Saturn Ion and Sky vehicles in the United States because faulty switches may have been used to repair the vehicles.

The parts are involved in the company’s recently announced ignition switch recall, which originally extended through the 2007 model year. About 95,000 faulty switches were sold to dealers and other companies. Of those, about 90,000 were used to repair older vehicles that were repaired before they were recalled in February.

General Motors said it’s not feasible to track down all the parts, so the company is recalling 824,000 more vehicles in the United States to make sure that every car has a current ignition switch.

General Motors said it’s unaware of any reports of fatalities with this group of vehicles where the front air bags didn’t deploy in an accident and the ignition is in the “off” position.

As with the earlier recalls, the ignition switch may unintentionally move from the “run” to the “off” position, leading to a loss of power.

General Motors said the risk could be increased if the key ring carries added weight or is jarred. It urges customers to remove all items from the key ring, and to use only the vehicle key.

General Motors is already recalling 1.62 million cars, made in the 2007 model year and earlier, that could have the defective ignition switches.

The company just increased the tally of deaths from this defect from 12 to 13.

Congressional leaders are interested in why it took the company took so long to address the faulty ignition switch problems and why consumers aren’t being told they shouldn’t drive their cars, according to a New York Times article.

Information on the ignition switch recall is available www.gmignitionupdate.com.

General Motors also announced Friday that it’s recalling 172,000 2013 and 2014 Chevrolet Cruze compact cars to replace a right front axle shaft that can fracture and separate without warning during normal driving.

The company also announced on Friday that’s halting the sale of 2013 and 2014 Chevrolet Cruze that had already been delivered to dealers.