Home About Newsletter Categories Donate
Snapchat settles FTC charges that it deceived users about disappearing messages, privacy
Who are our moms, and how much will we spend on them for Mother's Day

May is Older Americans Month 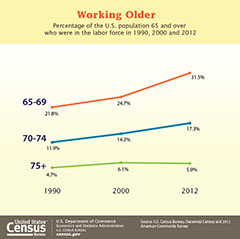 Although baby boomers don’t want to be called seniors, some of them are now age 65 and older. Born between 1946 and 1964, boomers on their birthday’s this year will be turning between ages 50 to 68.

After meeting with the National Council of Senior Citizens, Pres. John F. Kennedy designated May 1963 as Senior Citizens Month, a time to pay tribute to older people across the country. In 1980, Pres. Jimmy Carter's proclamation changed the name to Older Americans Month.

To learn more about seniors, check out these facts and figures on seniors from the U.S. Census Bureau:

The number of people who were 65 and older in the United States on July 1, 2012. This group made up 13.7 percent of the population.

Projected population of people 65 and older in 2060. People in this age group would be more than one in five U.S. residents then. Of 92 million, 18.2 million would be 85 or older.

The year when for the first time, the population 65 and older would outnumber people younger than 18 in the U.S.

The 2012 median income of households with householders 65 and older, about the same as previous year.

Percent supplemental poverty rate for those 65 and older, equaling 6.4 million people. Excluding Social Security would leave the majority of this population – 54.7 percent or 23.7 million – in poverty.

Estimated number of people 65 and older who were veterans of the armed forces in 2012.

Proportion of people 65 and older in 2013 who had completed high school or higher education.

Percentage of the population 65 and older in 2013 who had earned a bachelor's degree or higher.

Percentage of people 65 and older who were married in 2013.

Percentage of people 65 and older in 2013 who were widowed.

Computer and Internet use

The percentage of those 65 and older who reported living in homes with computers in 2011. In addition, 45.5 percent accessed the Internet either from home or elsewhere.

Percentage for those 65 and older who reported casting a ballot in the 2012 presidential election.

Percentage of householders 65 and older who owned their homes as of the end of 2013.

Percentage of Florida's population that was 65 and older in 2012, followed by Maine at 17 percent and West Virginia at 16.8 percent. Alaska had the lowest percentage at 8.5 percent, with the next states Utah at 9.5 percent and Texas at 10.9 percent.

Percentage of the population in Sumter, Fla., that was 65 and older in 2012 – which led all of the nation's counties. Other counties were Charlotte, Fla., 36 percent, and La Paz, Ariz., 34.9 percent. Chattahoochee, Ga., 3.6 percent, had the lowest percentage.