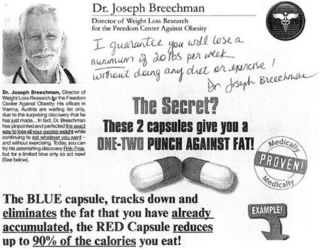 The Quebec-based marketers of a supposed weight-loss treatment have agreed to pay $500,000 to settle Federal Trade Commission charges that they deceived consumers with bogus claims that their Double Shot pills would cause rapid, substantial, and permanent weight loss, without diet or exercise.

Manon Fernet and the company she controls, which did business as the “Freedom Center Against Obesity,” marketed Double Shot to U.S. consumers from 2012 through October 2013, using direct mail advertising, according to the FTC’s lawsuit.

“These defendants made outrageous claims about their supposed weight-loss treatment and encouraged overweight consumers to forgo diet and exercise,” said Jessica Rich, director of the FTC’s Bureau of Consumer Protection.

The company’s advertising claimed to be from a Dr. Joseph Breechman, who was identified as the director of weight loss research for the Freedom Center Against Obesity in California. However, the center’s address that appeared in Double Shot ads and on the product label was the address where the products were shipped from.

In the mailer, “Dr. Joseph Breechman” was quoted as saying, “This plate of spaghetti has 720 calories! But when you take DOUBLE SHOT you will only absorb… 72 calories!”

In addition, the defendants allegedly claimed that the effectiveness of Double Shot as a weight-loss treatment had been proven by clinical studies.

The FTC charged that the defendants’ claims were false or unproven and violated the FTC Act.

Under the settlement, the defendants are banned from manufacturing or marketing weight loss products or working with others to sell these products.

Consumers should carefully evaluate advertising for weight loss products and for products that claim to cure diseases, the FTC advises.