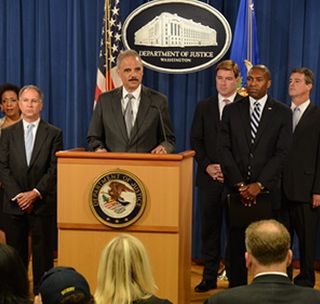 The U.S. Justice Department has reached a $16.65 billion settlement with the Bank of America Corp. – the largest civil settlement in American history – to resolve federal and state claims against the bank and Countrywide Financial Corp. and Merrill Lynch, companies it acquired in 2008.

As part of the settlement, the bank has agreed to pay a $5 billion penalty under federal financial recovery laws and to provide $7 billion in relief to struggling homeowners, including funds that will help defray tax liability as a result of mortgage modification or forgiveness.

U.S. Attorney General Holder said the payments are appropriate given the size and scope of the wrongdoing.

The Justice Department and the bank settled several of the department’s civil investigations related to the packaging and sale of residential mortgage-backed securities or RMBS and collateralized debt obligations or CDOs and the bank’s practices for the underwriting and origination of mortgage loans.

In the settlement, announced Thursday, the bank admitted that it sold billions of dollars of RMBS without disclosing to investors key facts about the quality of the loans. When the RMBS collapsed, investors, including federally insured financial institutions, suffered billions of dollars in losses.

The bank also said it originated risky mortgage loans and made misrepresentations about the quality of those loans to Fannie Mae, Freddie Mac, and the Federal Housing Administration.

Here’s how the $16.65 billion will be distributed:

An independent monitor will be appointed to determine whether the Bank of America is satisfying its obligations. If the bank fails to live up to its agreement by Aug. 31, 2018, it will be required to pay damages to organizations that will use the funds for foreclosure prevention, housing counseling, and community development, Holder said.

The settlement doesn’t release individuals from civil charges, or absolve the bank, its current or former subsidiaries and affiliates or any individuals from potential criminal prosecution, he said.

The settlement is part of the ongoing efforts of Pres. Obama’s Financial Fraud Enforcement Task Force and its Residential Mortgage-Backed Securities Working Group, which has recovered $36.65 billion for American consumers and investors.

The RMBS Working Group is a federal and state law enforcement effort focused on investigating fraud and abuse in the RMBS market that helped lead to the 2008 financial crisis.

To learn more about the RMBS Working Group and the Financial Fraud Enforcement Task Force, go to www.stopfraud.gov.