Home About Newsletter Categories Donate
USDA refuses to act on antibiotic-resistant salmonella and approves controversial poultry inspection plan
Recall of the Week: VIZIO E-series flat panel TVs due to risk of tip over 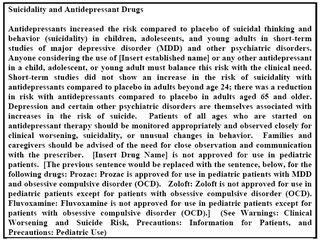 Newer prescription drugs have a one in three chance of acquiring a black box warning or being withdrawn for safety reasons within 25 years of their approval, according to a new study.

The study, published Monday in the August issue of Health Affairs, examined all of the drugs approved by the U.S. Food and Drug Administration over a 35-year period.

Black box warnings are part of the prescription medication label intended to alert consumers and health care professionals about important safety concerns, such as serious side effects or life-threatening risks. Placed at the beginning of the package insert with a “box” or border around the text, they’re the most serious medication warnings required by the FDA.

The study compared warning and withdrawal rates for drugs released before and after 1992. The approval process for medications changed in 1992 with the Prescription Drug User Fee Act, which allowed the FDA to collect fees to expedite drug approvals.

Since the law’s enactment, the average drug approval time for all drugs has fallen from 34 months to 16 months.

Very few of the 32 drugs withdrawn for safety reasons had clearly unique benefits at the time of approval, but all had unique risks that eventually led to their withdrawal, according to study researchers from Cambridge Health Alliance/Harvard Medical School, Boston Medical Center/Boston University School of Medicine, City University of New York School of Public Health, and Public Citizen.

The researchers discovered that drugs released after the PDUFA passed were more likely to be withdrawn or have a black box warning, with 26.7 percent of these drugs receiving the warning compared to 21.2 percent in the pre-PDUFA drugs.

Half of all black box warnings appeared after a drug had been on the market for 12 years, and safety withdrawals have occurred as late as 30 years after a drug’s initial release.

The authors said that the expedited process may have led to the release of drugs before they could be adequately evaluated for safety issues.

“The FDA is under constant pressure to rush new drugs through the pipeline to approval,” said study lead author Cassie Frank, M.D., a physician at Cambridge Health Alliance and an instructor at Harvard Medical School. “In its hurry, the FDA is apparently failing to distinguish useful drugs from toxic ones, and more dangerous drugs are slipping through.”

By the time many drugs receive serious safety warnings, millions of Americans have already been exposed to their side effects, which can sometimes be fatal, Frank said.

“As a doctor, I try to keep my patients safe by avoiding new drugs, when there are similar, older ones available,” he said.

Sidney Wolfe, M.D., study co-author and founder of Public Citizen's Health Research Group, said the FDA's resources for reviewing drugs have increased dramatically since the passage of PDUFA, amounting to $760 million this fiscal year from pharmaceutical companies, about two-thirds of the agency's drug review budget.

“Since PDUFA, the review times for the drugs that are eventually banned have decreased enormously,” Wolfe said. “From an average, prior to PDUFA, of about three years from receipt of the drug application to FDA approval, the interval has dropped sharply to about one year, following PDUFA. “

These shorter review times, combined with increased FDA authority to require further studies after approval – rather than settling safety issues before approval – possibly contributes to the increased rate of withdrawals and black box warnings," Wolfe said.