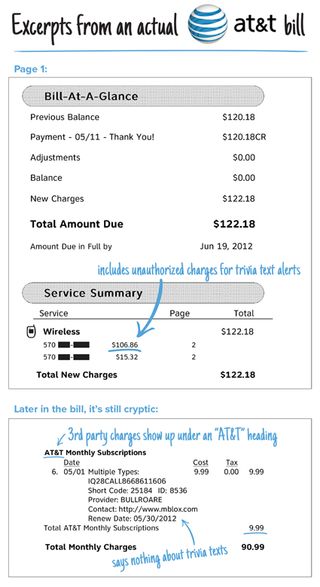 As part of a $105 million settlement, AT&T Mobility will pay $80 million to the Federal Trade Commission to provide refunds to consumers the company billed for unauthorized third-party charges on their wireless bills, a practice called “cramming.”

In its lawsuit against AT&T, the FTC said that AT&T billed its customers for hundreds of millions of dollars in charges originated by other companies, usually $9.99 a month, for subscriptions for ringtones and text messages containing love tips, horoscopes, and “fun facts.” AT&T kept at least 35 percent of the charges.

“This case underscores the important fact that basic consumer protections – including that consumers should not be billed for charges they did not authorize - are fully applicable in the mobile environment,” said FTC Chairwoman Edith Ramirez.

In addition to refunds, the settlement also includes $20 million in penalties and fees paid to 50 states and the District of Columbia and a $5 million penalty to the Federal Communications Commission.

Consumers who think they were charged by AT&T without their authorization can visit www.ftc.gov/att to submit a refund claim. If consumers aren’t sure if they’re eligible, they can visit the claims website or call 877-819-9692.

This is the FTC’s seventh mobile cramming case since 2013, and its second against a mobile phone company this year. The FTC filed a lawsuit against T-Mobile in July, which is pending in court.

The FTC’s AT&T investigation showed that the company received high volumes of complaints on unauthorized third-party charges, with its customer service department receiving more than 1.3 million calls in 2011.

According to the lawsuit, in October 2011, AT&T altered its refund policy so that customer service representatives could only offer to refund two months’ worth of charges to consumers who asked for a refund rather than three months.

In February 2012, one AT&T employee said in an e-mail that “Cramming/Spamming has increased to a new level that cannot be tolerated from an AT&T or industry perspective.” But, according to the lawsuit, the company didn’t act to determine whether third parties had in fact gotten authorization from consumers for the charges placed on their bills.

AT&T’s consumer bills made the problem worse, according to the lawsuit, because it was difficult for customers to know that third-party charges were being placed on their bills.

Under the settlement, AT&T must notify all of its current customers who were billed for unauthorized third-party charges of the settlement and refund program. Former customers may be contacted by the FTC’s refund administrator.

Marty Richter AT&T spokesman said AT&T has had rigorous protections in place to guard consumers against unauthorized billing from these companies, and last year it discontinued third-party billing for premium short messaging services.

“Today, we reached a broad settlement to resolve claims that some of our wireless customers were billed for charges from third-parties that the customers did not authorize,” said Richter. “This settlement gives our customers who believe they were wrongfully billed for PSMS services the ability to get a refund.”