Facts and figures for Thanksgiving 2014 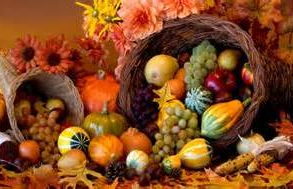 What are your plans for Thanksgiving? Will you be following family traditions or making new ones?

Here are some facts and figures on what’s happening in the nation this year on Thanksgiving Day, the day when Americans gather together to give thanks for all that they have.

Most Americans will be having Thanksgiving dinner at home, inviting friends and family to join them.

About 88 percent of U.S. households eat turkey on Thanksgiving, according to EatTurkey.com. At an average weight of 16 pounds a turkey, that adds up to 736 million pounds that will be eaten this Thanksgiving.

The estimated cost of a Thanksgiving Day dinner for 10 is $49.41, a 37-cent increase from last year’s average of $49.04, according to the American Farm Bureau Federation’s 29th annual informal price survey of classic items served for the celebration.

About 46.3 million Americans will travel 50 miles or more from home during the Thanksgiving weekend, the highest volume for the holiday since 2007 and a 4.2 percent increase over 2013, according to AAA Travel. Almost 90 percent of travelers, 41.3 million, will celebrate the holiday with a road trip and likely will enjoy the lowest Thanksgiving gas prices in five years.

Air travel for Thanksgiving is expected to be at the highest level since 2007, with 3.55 million Americans flying. Travelers will find moderately higher prices with airfares 1 percent higher, mid-range hotels up 8 percent, and car rentals costing 10 percent more.

The average distance traveled this Thanksgiving will be 549 miles roundtrip, and Americans will spend an average of $573 during the holiday weekend.

About 67.6 million holiday shoppers say they’ll shop on the Thanksgiving weekend, down slightly from 69.4 million who planned to do so last year, according to a survey conducted for the American Retail Federation. About 72.5 million say they’ll wait and see if the deals are worth it before they decide, up 2 percent over last year’s 71 million “maybe” shoppers.

About 18.3 percent of shoppers – 25.6 million – say they will check out Thanksgiving Day deals and shop Thursday, down from the 23.5 percent last year.

Happy Thanksgiving. Whether you’re having a big crowd at your house or traveling, I hope you have a great celebration.