Getting my computer to run faster is my best consumer experience this week, while customer service at Apple is my worst 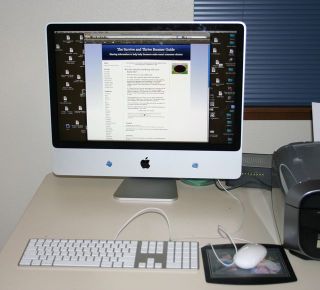 After I went to the Apple store – see the report on that below – I took my iMac to Best Buy to get more RAM installed. RAM is the "working" memory of the computer. It's used to store data for programs, sequences of instructions, on a temporary basis.

I had two modules of 4GB each put in. Now, my computer is running faster.

The experience wasn’t without problems. At first, they took out what was in my computer and replaced it with two modules. The technician said the new modules weren’t compatible with the old.

But, I said, I have two slots left. Add two more modules.

That didn’t work. So the technician went back to my original modules plus the two modules of 4GB each.

It took a couple of hours, so during the process, I had a fast food meal at the food court nearby.

I can only imagine what would have happened if I’d tried to do the installation myself.

Last week, I wrote about how frustrating it was to try to talk with a real person at an Apple store near me rather than someone in the Philippines. When I finally reached a “real person,” he said the solution would be to bring my computer in.

That’s challenging because there’s no Apple store in my community. It’s a 45-minute drive to reach the nearest one. In addition, the iMac is heavy.

I was told that most problems could be figured out in 15 minutes but more time was available is needed. However, that didn’t happen. Apparently, the Apple “geniuses” are on a 15-minute schedule, like doctors.

The genius said iPhoto was running so slowly because I have more than 100,000 photos in it. I didn’t know it had limited storage.

The solution, he said, is to move many of the photos to an external hard drive. Even buying a new computer wouldn’t help. I’d be in the same situation in a year.

I could, however, buy new RAM to make my computer run faster. No, they don’t sell it, and no, they don’t install it.

I could buy it and install it myself, he said.

I wanted to know how to make a DVD of a half-hour movie I’ve made. He found a video on how to do it, although they no longer support iDVD, and put a link to it on my hard drive.

I forget to ask about another problem – I keep getting asked to type in my password almost every time I send an email.

Someone else sold me another external hard drive – I already have two. One for my Time Machine backup and one for my PC that I use for travel.

So, all in all, I’m not happy with Apple’s customer service. Maybe Apple is making so much money off its devices, which people carry around, that customer service is no longer important to the company.