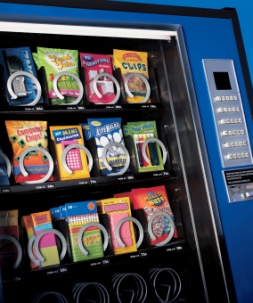 When I was working in a government office building, management decided to no longer sell sandwiches and milk in the vending machine. They were replaced with junk food.

A study released in October found that vending machines on state and local government properties are stocked mainly with unhealthy food and beverages.

Fifty-eight percent of beverages were sugar-sweetened. Of the 42 percent that were “healthier” options: 16 percent were water, 23 percent were low-calorie beverages, and 3 percent were 100 percent juice.

Candy, with 32 percent, was the most prevalent item followed by chips, 24 percent, and sweet baked goods, 15 percent.

These three items made up more than 80 percent of the products available in vending machines on public property. Only 5 percent of vended foods were healthy options, such as fruits, vegetables, or nuts.

The study was conducted by the Center for Science in the Public Interest.