Home About Newsletter Categories Donate
What going to happen in the economy in 2015?
Government funding compromise is bad for consumers

Is the Washington Post writing favorable articles about gaming? 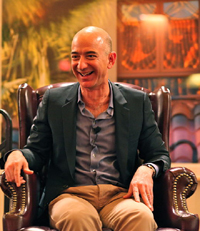 I read The Washington Post every day. I occasionally find articles about government that I don’t see elsewhere.

Right away, after Jeff Bezos, founder of Amazon, pictured above, bought the newspaper I noticed an unusually large number of articles on gaming.

I wondered what Bezos’ interests were in buying the newspaper. I wrote the article “What’s Happening at The Washington Post Now That Jeff Bezos Is the Owner?”

Amazon has had a long interest in gaming. Amazon is one of the few companies in the world that both designs gaming hardware and develops games.

It was a big concern to me, as a journalist, to read last month’s Post article “Video Games Are Getting Respect – as Big Business, Entertainment, Creative Discipline.”

It gushed on and on about how great gaming is.

One surprise was that gaming makes more money, with $21 billion annually, than movies, at $10.9 million, and the music industry, at $7 billion, combined.

Now, I’m not a fan of gaming. The games are, for the most part, too violent and sexist. They’re right up with movies and television for excessive violent images, which I think are harmful to kids and youth.

But, what was most surprising about the article is that nothing negative was mentioned about gaming, nothing about the violence and sexism of the genre.

That’s especially troubling since gamers attacked indie video game developer Zoe Quinn after an ex-boyfriend wrote a blog post implying that she had traded sex for positive reviews. Quinn received rape and death threats, hacking attempts on her website, online publication of personal information, including her phone number and home address, and hundreds of comments on her Tumblr calling her a “slut” and worse.

Quinn wasn’t able to attend a conference in Texas as a speaker because the local police said they couldn’t prevent people from carrying guns into the auditorium.

Quinn had to leave her home for fear of her safety. A friend of hers also was attacked.

I was appalled when I read about this.

What kind of people are gamers to attack someone like this?

How could a reporter for The Post write an article about video games getting respect?

It’s obvious that Jeff Bezos has an interest in gaming.

The “respect” article mentioned that Amazon’s $1 billion acquisition of the game-streaming social network Twitch was one of the three biggest gaming acquisitions of the year.

I noticed that the reporter didn’t disclose that Bezos, owner of Amazon, is also owner of The Washington Post.

In addition to the “respect” article, I saw about a dozen other positive articles on gaming in The Post in the last couple of months, among them that playing video games is good for your brain. Really?

These positive articles about gaming stand out to me because I don’t read them elsewhere.

Is Jeff Bezos influencing the news at The Post?

I don’t know. But, I wish the newspaper would quit gushing about how great video games are.

Let’s hope the newspaper returns to more balanced coverage of the topic.