Home About Newsletter Categories Donate
Baby boomer bloggers focus on travel, holiday shopping, dreams, pets and housing
Five things you should never say after a car accident: A legal guide to the moments following a collision 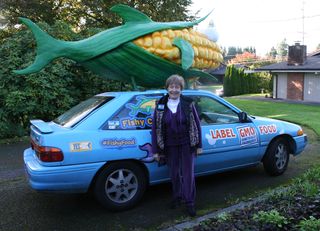 I support the labeling of food with genetically modified ingredients. Consumers have the right to know what’s in their food.

It was extremely disappointing that a ballot measure was defeated last year in Washington state, where I live, to adopt GMO labeling. One voter that I talked to said he didn’t think Washington should be the first state to adopt it.

This year, nearly $21 million was spent to beat a similar measure in Oregon. It was narrowly defeated by 809 votes. Since the vote was so close, a recount is being conducted.

A similar measure in Oregon was defeated in 2008, and also in California in 2012.

More than $16 million also was spent to defeat a GMO labeling measure in Colorado this year.

This year, voters in California and Hawaii adopted measures that ban the production of GMOs at the county level. In California, a ballot initiative prohibiting the propagation, cultivation, raising, or growing of GMO products in Humboldt County passed. And, in Hawaii, a similar measure prohibiting the cultivation or reproduction of GMOs within Maui County was approved.

Legislation to require the labeling of GMO food has been introduced in about 30 states, but getting laws passed is tough because large corporations pour so much money into campaigns against them.

Most of that money comes from large seed corporations such Monsanto and DuPont Pioneer, and from processed food companies such as Pepsi, Land O' Lakes, and Smucker's.

A number of polls have shown more than 90 percent of Americans would prefer GMO foods to be labeled.

Worldwide, genetically engineered foods must be labeled in 64 countries.

In a petition, the chefs called on Congress to advance legislation sponsored by Sen. Barbara Boxer, D-Calif. and Rep. Peter DeFazio, D-Ore.

“As chefs, we know that choosing the right ingredients is an absolutely critical part of cooking,” the petition said. “But when it comes to whether our ingredients contain genetically modified organisms, we're in the dark. It’s time for Congress to move us forward, not backward, when it comes to our right to know what’s in our food.”

Advocates from Food Policy Action, the Environmental Working Group, the Center for Food Safety, Just Label It, and other national organizations working for labeling of GMO foods joined the chefs for meetings with lawmakers.

“This is about transparency, not technology,” said Scott Faber, EWG’s vice president of government affairs. “Consumers simply want to know what’s in their food and how it’s grown – just like consumers in 64 other countries.”

However, the newly elected Republican-led Congress could add momentum to the anti-GMO food labeling effort and pass a bill called the Safe and Accurate Food Labeling Act. The food industry-authored bill would institute voluntary GMO labeling nationwide and would preclude states from adopting their own mandatory labeling laws.

See the NonGMO Project to find an organization in your state that’s working on getting GMO labeling passed.