No recall yet in caramel apple listeriosis outbreak, but consumers advised not to eat commercially produced, prepackaged caramel apples 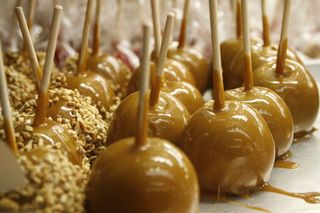 Five people have died from an outbreak of listeriosis. An initial investigation indicates that commercially produced, prepackaged caramel apples are the likely source, said the Centers for Disease Control and Prevention.

Twenty-eight people in 10 states have been reported as being infected with the outbreak strains of Listeria monocytogenes, according to the CDC. The agency reports that 26 ill people have been hospitalized.

Listeriosis contributed to at least four of the five deaths reported, the U.S. Food and Drug Administration said. Nine illnesses were pregnancy-related. Four illnesses were among otherwise healthy children ages 5 to 15 years.

The Minnesota Department of Health has reported four illnesses. The individuals involved in the Minnesota cases purchased caramel apples from Cub Foods, Kwik Trip, and Mike’s Discount Foods, which carried Carnival brand and Kitchen Cravings brand caramel apples. These two brands are no longer available for purchase at retail locations, the FDA said.

The FDA, CDC, and state and local officials are investigating the listeriosis outbreak.

What are the symptoms of Listeriosis?

Listeriosis is a rare but serious illness caused by eating food contaminated with the bacterium called Listeria monocytogenes.

Anyone who experiences fever and muscle aches, sometimes preceded by diarrhea or other gastrointestinal symptoms, or develops fever and chills after eating commercially-produced, prepackaged caramel apples should seek medical care and tell the health care provider about any history of eating the apples.

Symptoms can appear from a few days up to a few weeks after eating the contaminated food.

Listeriosis can be fatal, especially in high-risk groups including the elderly and people with weakened immune systems and chronic medical conditions, such as cancer. In pregnant women, listeriosis can cause miscarriage, stillbirth, and premature labor, and it can cause serious illness or death in newborn babies.

What do consumers need to o?

Consumers shouldn’t eat commercially-produced, prepackaged caramel apples, including those containing nuts, sprinkles, chocolate, or other toppings, until more specific guidance can be provided. Consumers should throw away any of these caramel apples that they may have in their homes, the FDA advises.

Recommendations for preventing listeriosis are available at the CDC Listeria website: http://www.cdc.gov/listeria/prevention.html.

Listeria monocytogenes can grow at refrigerator temperatures, as low as 40 degrees. The longer ready-to-eat refrigerated foods are stored in the refrigerator, the more opportunity Listeria has to grow.

For refrigerators, food preparation surfaces, and cutting utensils that may have come in contact with caramel apples, it’s important that the consumers thoroughly clean the following areas:

In addition, consumers can follow these steps for food safety:

Listeriosis was linked to one of the worst food-borne outbreaks in recent years when 147 people became infected after eating tainted cantaloupe in 2011. Of those infected, at least 33 died.

In 2013, the CDC estimated about 1,600 illnesses and 260 deaths caused by Listeriosis occur annually in the United States.

The FDA said consumers with questions about food safety can call 888-SAFEFOOD Monday through Friday between 10 a.m. and 4 p.m. ET, or visit http://www.fda.gov.