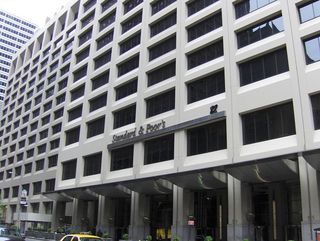 The ratings agency Standard & Poor’s will pay more than $77 million to settle charges by the Securities and Exchange Commission and two states that it inflated its ratings of commercial mortgage-backed securities or CMBS without informing investors.

“Investors rely on credit rating agencies like Standard & Poor’s to play it straight when rating complex securities like CMBS,” said Andrew J. Ceresney, director of the SEC Enforcement Division. “But Standard & Poor’s elevated its own financial interests above investors by loosening its rating criteria to obtain business and then obscuring these changes from investors.

The enforcement actions were the SEC’s first against a major ratings firm, Ceresney said.

One order addressed the company’s CMBS ratings methodology. Its public disclosures indicated it was using one approach when it actually used a different methodology in 2011. As part of the settlement, the company agreed to take a one-year timeout from rating CMBS.

Another SEC order found that after being frozen out of the market for rating conduit fusion CMBS in late 2011, Standard & Poor’s sought to re-enter that market in mid-2012 by overhauling its ratings criteria. These are securities backed by pools of loans secured by commercial real estate. A financial intermediary is included, such as a bank, which acts as a link between the investor and lender.

A third SEC order involved internal controls failures in Standard & Poor’s oversight of residential mortgage-backed securities or RMBS ratings. The order found that the company allowed breakdowns in the way it conducted ratings surveillance of previously rated RMBS from October 2012 to June 2014. It didn’t follow its internal policies for making changes to its surveillance criteria and instead applied ad hoc workarounds that weren’t fully disclosed to investors, the SEC said.

In a separate order, the SEC Enforcement Division alleged that the former head of Standard & Poor’s CMBS Group fraudulently misrepresented the manner the firm used to calculate an important part of some CMBS ratings in 2011. Barbara Duka allegedly instituted a shift to more issuer-friendly ratings criteria, and the firm failed to properly disclose the less rigorous methodology, the SEC said.

The charges against Duka will be scheduled for a public hearing before an administrative law judge.

Standard and Poor’s is a division of the publishing company McGraw Hill.