Recall of the Week: Kidde disposable plastic fire extinguishers due to failure to discharge 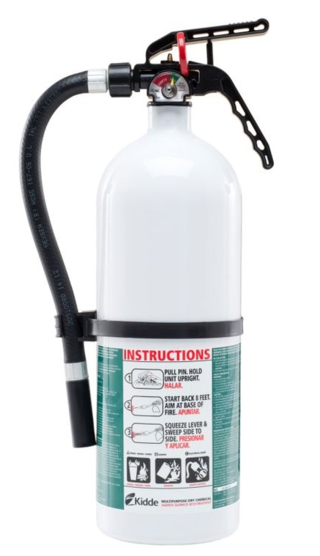 Kidde is recalling about 4.6 million disposable plastic fire extinguishers in the United States and 175,000 in Canada.

A faulty valve component can cause the disposable fire extinguishers not to fully discharge when the lever is repeatedly pressed and released during a fire emergency, posing a risk of injury, the company and U.S. Consumer Product Safety Commission said.

Kidde has received 11 reports of the recalled fire extinguishers failing to discharge as expected. No injuries have been reported.

This recall involves 31 models of Kidde disposable fire extinguishers with Zytel black plastic valves. The recalled extinguishers are red, white, or silver and are either ABC or BC rated.

The ratings can be found to the right of the nameplate.  Manufacture dates included in the recall are July 23, 2013 through October 15, 2014.

A 10-digit date code is stamped on the side of the cylinder, near the bottom. Digits five through nine represent the day and year of manufacture in DDDYY format. Date codes for recalled units manufactured in 2013 are XXXX 20413 X through XXXX 36513 X and 2014 are XXXX 00114 X through XXXX 28814 X.

A nameplate attached to the front of the fire extinguisher has one of the model numbers.

The disposable fire extinguishers were sold at Home Depot, Menards, Walmart, and other department, home, and hardware stores nationwide and online from August 2013 through November 2014. The cost was between $18 and $65 and about $200 for model XL 5MR.

Consumers should immediately contact Kidde for a replacement fire extinguisher, the company and commission advise.