Home About Newsletter Categories Donate
Pharmaceutical manufacturer settles kickback charges with 49 states, D.C.
How to choose fruits and vegetables with the least amount of pesticides

Chip credit cards: When will the more secure cards be available for American consumers? 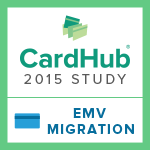 Visa and MasterCard have set the deadline of October 2015 as the date when banks and merchants must start using credit cards with chips or incur significant added liability for fraudulent transactions.

With consumers concerned about gigantic data breaches at nationwide retailers and the deadline approaching, what progress is being made by credit card companies and retailers in issuing the new cards?

EMV, which stands for EuroPay, MasterCard, and Visa, is a global set of standards for chip cards and the technology used to verify them. EMV chip cards contain embedded microprocessors that provide strong security features not possible with traditional magnetic stripe cards.

EMVCo manages, maintains, and enhances the specifications. It’s owned by American Express, Discover, JCB, MasterCard, UnionPay, and Visa, and includes other organizations from the payments industry.

Eighty countries globally are in various stages of EMV chip migration, including Canada and countries in Europe, Latin America, and Asia. The United States is one of the last countries to migrate to EMV chip technology.

Some of CardHub report’s main findings include: