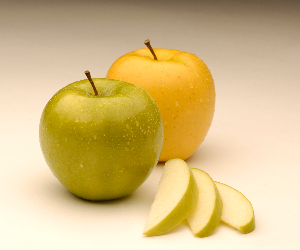 Simplot’s varieties of Ranger Russet, Russet Burbank, and Atlantic potatoes, known as “Innate potatoes,” are genetically engineered to reduce the formation of black spot bruises. They’re also engineered to produce less acrylamide, a potential carcinogenic that can form in some foods during high-temperature cooking, such as frying.

The FDA said it doesn’t think that the Arctic apple or the Innate potato pose a risk to human health, and it’s concluded that these foods are as safe and nutritious as conventional apples and potatoes.

However, the agency is considering whether the products should be labeled.

“In certain circumstances, characteristics of these varieties of apples and potatoes that differ from their conventional counterparts may require disclosure to the consumer,” the FDA said in a statement. “Both companies are encouraged to consult with the FDA about potential labeling requirements.”

It could take years for the genetically modified apples to appear on the market, but the potatoes may be available in a few months.

Last week, regulators at the U.S. Department of Agriculture decided that the new apple pose no additional dangers to the environment, while the potato was approved last fall. This means that farmers are now legally free to plant and sell them.

The critics of genetically modified food, including Consumers Union, Food and Water Watch, and Friends of the Earth, protested the USDA's decision.

This GMO apple is simply unnecessary. Apple browning is a small cosmetic issue that consumers and the industry have dealt with successfully for generations. The USDA has let down U.S. apple growers and the public by wasting resources on this useless and risky food. To make matters worse, these apples will not be required to be labeled and consumers will not know that the sliced apples they pack in their children’s lunches were made through genetic engineering.

The U.S. apple industry also is opposed to the genetically modified apples, and some food companies have said they wouldn’t sell Arctic Apples.

The U.S. Apple Association, Washington Apple Commission, and other grower groups are worried about the negative impact GMO apples could have on the apple industry. They’re concerned consumers will stop buying all apples in an effort to avoid the new Arctic apple.