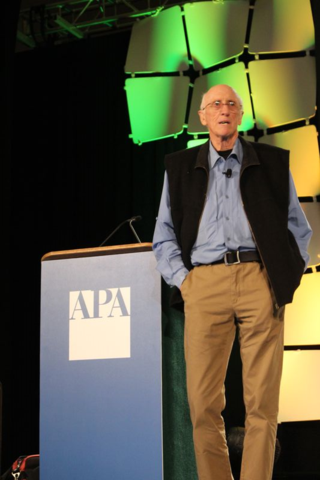 Stewart Brand, conservationist and founder of the Whole Earth Catalog, thinks the trend of people moving to the city is a good one because rural areas recover when people leave.

Brand, speaking Tuesday at the national conference of the American Planning Association in Seattle, said by the end of the century, 80 percent of people in the world will live in cities.

Villages everywhere are emptying out in the biggest migration in history, which is a great “green” thing, he said.

Brand believes subsistence farming is a poverty trap, and it damages natural areas because people on poor land burn and eat everything in local natural environment.

Life in villages improves after many people leave because those who remain can sell cash crops to the people who moved to the city.

This migration to the cities will help diffuse the “population bomb,” he said. One reason is women who live in cities have fewer children.

Although some people see crowded cities as inhumane, Brand believes “squatter” cities or slums are vibrant places where people support each other and are “working like crazy” to get out of poverty.

He believes the best buildings are made from low-cost materials and use standard designs so they can be easily modified. He's author of the book “How Buildings Learn: What Happens After They’re Built.” 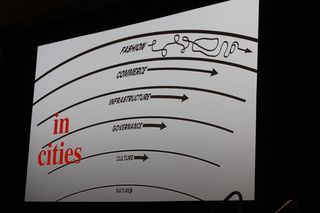 Brand discussed place layering, a cross section of civilization. He describes it on his website as follows:

In addition to applauding the historic migration to cities so rural areas can recover, Brand, cofounder and president of The Long Now Foundation, an organization that fosters long-term thinking in the framework of the next 10,000 years, has startling ideas on how to improve the natural environment.

Brand is recommending that the passenger pigeon and the wooly mammoth be brought back to help restore natural areas. 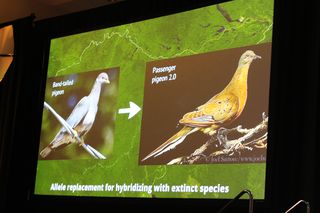 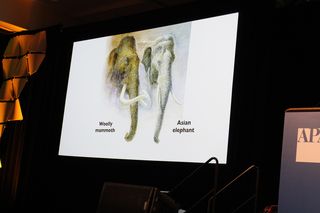 The closest relative to the wooly mammoth is the Asian elephant. The goal of woolly mammoth revival is to produce new mammoths that are capable of repopulating the tundra and nearby forests in Eurasia and North America.

The tundra that developed after mammoths died out is contributing to climate change. Without grasslands to insulate the tundra’s permafrost, the permafrost is melting, releasing greenhouse gases that have been trapped for thousands of years.

Brand said that tundra can be converted back to grasslands with the introduction of grazers.

Teams are working on these projects now, he said.

An audience member asked Brand if he thought genetically modified organisms were harmful to people and the environment.

Brand said pesticides are the worst thing that has happened to the environment, so if you can put it in the plant itself, then it won’t kill beneficial insects that birds feed on.

He said golden rice has vitamin A precursor added, which is designed to prevent blindness in millions of children who depend on rice for their major food.

Brand described an American chestnut tree genome, which has been developed to be blight proof, because an Asian fungus wiped out most of the chestnut trees in the Northeast.

Not all GMO stories are happy, but many of them are, he said.

Brand ended his talk by telling planners to go forth and green cities.