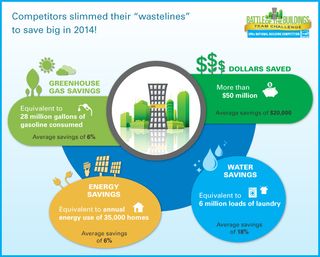 More than 5,500 buildings across the United States, the District of Columbia, and Puerto Rico competed in the U.S. Environmental Protection Agency's fifth-annual Energy Star Battle of the Buildings Competition: Team Challenge.

The buildings entered in the competition saved more than $50 million, cut their energy use by more than two billion kBtus, and prevented more than 250,000 metric tons of greenhouse gas emissions. That’s equal to the annual energy use of more than 37,000 homes.

Competitors reduced their energy use an average of 6 percent, which is an average savings of nearly $20,000 per building.

A Woodville, Ala., group of buildings, “Going Blue for Woodville,” won the top award in the category, 2015 Top Team, by cutting their average energy use by 25 percent.

The five-buildings – a town hall, community center, chapel, co-op building, and wastewater treatment plant – achieved the greatest energy reduction of 100 applicants in the category during a 12-month period. Woodville has a population of 741.

The agency is also recognizing the 2015 Top Building, the Woodville, Ala., Chapel, for an energy use reduction of 68.4 percent.

In support of Pres. Barack Obama’s Climate Action Plan, which calls for buildings to cut waste and become at least 20 percent more energy efficient by 2020, the competition targeted wasted energy in buildings and motivated building owners and occupants to improve energy efficiency, reduce harmful carbon pollution, and save money.

This year’s theme, “Team Challenge,” featured teams of five or more buildings that worked together to reduce their energy use for one year.

Many organizations used the competition to involve staff and students in the effort.

The top team finishers and their percentage-based reductions in energy use are:

Among individual buildings, the top finishers and their percentage-based reductions in energy use include:

The competition measured energy performance for 2014.