Some progress made in controlling foodborne infections, despite thousands of hospitalizations and hundreds killed last year 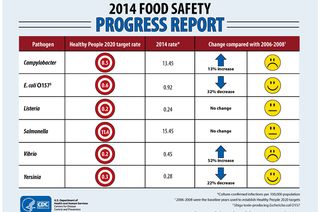 Thousands of people are hospitalized each year and hundreds killed by foodborne illness. Some progress is being made in combating the pathogens causing these illnesses, but more needs to be done to protect consumers.

Salmonella was the most common bacteria causing foodborne illness in 2014 followed by Campylobacter.

In 2014, rates of infection from a serious form of E. coli and a common Salmonella decreased compared to 2006-2008, according to data published Thursday by the Centers for Disease Control and Prevention. However, less common types of Salmonella increased.

“We’re cautiously optimistic that changes in food safety practice are having an impact in decreasing E. coli, and we know that without all the food safety work to fight Salmonella that more people would be getting sick with Salmonella than we are seeing now,” said Robert Tauxe, M.D., deputy director of CDC’s Division of Foodborne Waterborne and Environmental Diseases.

“However, much more needs to be done to protect people from foodborne illness,” Tauxe said.

The U.S. Food and Drug Administration is planning to publish new regulations in 2015 on produce safety, processed foods, and imported foods, he said.

Al Almanza, deputy under secretary for food safety at the U.S. Department of Agriculture, said further reductions in Salmonella and Campylobacter infections are expected as the agency’s improved standards for poultry take effect later this year.

Salmonella Typhimurium – which has been linked to poultry, beef, and other foods – was 27 percent lower than it was in 2006-2008, continuing a downward trend begun in the mid-1980s.

Two other less common types of Salmonella, Javiana and Infantis, more than doubled. Salmonella Javiana is concentrated in the Southeastern United States, but has been spreading within the Southeast and to other areas of the country.

However, when all types of Salmonella are combined, there was no change in 2014.

Yersinia has declined enough to meet the Healthy People 2020 goal.

The data are from FoodNet, CDC’s data system that tracks nine foodborne pathogens in 10 states and monitors trends in foodborne illness in 15 percent of the U.S. population, about 48 million people.

In 2014, FoodNet logged in more than 19,000 infections, about 4,400 hospitalizations, and 71 deaths from the nine foodborne germs it tracks.

A national total can be roughly estimated by multiplying these statistics to reflect the U.S. population of about 320 million, according to a Washington Post article. That means thousands of Americans are infected and hospitalized each year by foodborne pathogens and hundreds die.

FoodNet is a collaboration the CDC, 10 state health departments, the USDA’s Food Safety and Inspection Service, and the FDA. The sites are the states of Connecticut, Georgia, Maryland, Minnesota, New Mexico, Oregon, and Tennessee, and selected counties in California, Colorado, and New York.

For information on avoiding illnesses from food, visit www.foodsafety.govhttp://www.cdc.gov/Other/disclaimer.html.