Home About Newsletter Categories Donate
Feds to forgive loans for students who attended Corinthian Colleges
Why do you use credit cards? 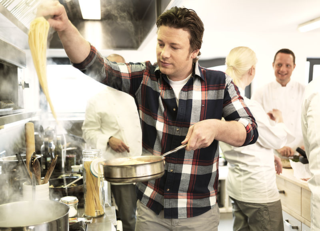 We all have different opinions of chefs due to their popularity on the Food Network and other TV channels. They can be glamorous, feisty, domineering, knowledgeable, entertaining, arrogant, and inspiring.

They’ve brought new respect for what it takes to run a restaurant and glamour to the industry.

However, chefs also are working to make a difference – connecting producers and consumers, helping us understand where food comes from, and knowing what consumers want.

Food Tank, a food think tank, offers this list of 24 chefs and organizations that are making change everyday in kitchens around the world.

Dan Barber, chef at Blue Hill and Stone Barns in New York, as well as the Stone Barns Center for Food and Agriculture, educates his patrons about where their food comes from and the good agricultural practices required to produce it.

Chef Action Network provides a support network with training for chefs who want to promote a better food system.

Euro-toques, based in France, represents more than 2,000 chefs in Europe and educates chefs, children, and the public about food issues while supporting food producers and the European food heritage.

The Culinary Institute of America, with locations in New York, California, Texas, and Singapore, is committed to sustainability with a Green Campus Initiative that promotes local sourcing and integrates sustainability across curriculums.

The International Culinary Center, with locations in New York, California, and Italy, trains culinary professionals with an emphasis on farm-to-table food systems.

Ben Shewry's Attica Restaurant in Melbourne, Australia, awarded the Best Restaurant in Australasia prize by San Pellegrino, aims to reconnect diners with an understanding of where their food comes from.

Known as the Renegade Lunch Lady, Ann Cooper, an advocate for feeding children better school lunches, has succeeded in bringing fresh, local food into school lunch systems in the Berkeley and Boulder areas.

Alice Waters founded Chez Panisse restaurant in Berkeley in 1971, while focusing on promoting a "good, clean, and fair" food economy through using fresh organic seasonal ingredients. She also launched The Edible Schoolyard in the Bay area, an initiative that actively engages children in all aspects of the food cycle.

Tom Colicchio, known for Gramercy Tavern and Craft restaurants in New York, is committed to food policy reform. Founded in 2012, Food Policy Action is a collaboration between food policy advocates that exposes how politicians vote on food issues.

As founder of the Jamie Oliver Foundation, Jamie Oliver is a pioneer of sustainable food through projects focusing on better school lunch programs, the reduction of food waste, increasing the amount of time families spend in the kitchen, and the promotion of eating fresh, wholesome foods.

Eric Ripert of Le Bernardin participates in the City Harvest food rescue program, which collects fresh surplus food from restaurants in New York and makes it available to communities in need.

Olivier Roellinger, formerly of Maisons de Bricourt restaurant in Brittany, France, uses his position as vice-president of the hotel and restaurant group Relais and Chateaux to advocate for the sustainable sourcing of fish populations, particularly the banning of bluefin tuna and the eventual elimination of all endangered fish from menus.

Washington, D.C.-based Barton Seaver has been instrumental in teaching his patrons about the relationship between seafood and sustainability.

Bill Telepan opened his New York restaurant to showcase seasonal, greenmarket ingredients, while his Wellness in the Schools program focuses on healthy eating, sustainability, and fitness for kids in public schools.

José Andrés, the chef behind Minibar and Jaleo in Washington, D.C., is the founder of World Central Kitchen, which trains people how to safely and properly use cook stoves, generates jobs, and strengthens local economies around the world.

Haiti Breathes is a partnership between WCK, USAID, Chemonics, and Switch Haiti that is converting 800 schools in and around Port au Prince from charcoal energy to liquid petroleum gas.

Marc Vetri, who owns restaurants in Philadelphia, founded the Vetri Foundation for Children, whose mission is to educate children about healthy eating through teaching and social interaction.