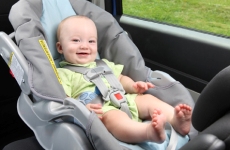 Heat and UV-ray exposure in cars can accelerate the release of these chemicals from products in a vehicle.

Many children spend hours in a car every week, or even every day, possibly exposing them to harmful flame retardants. Babies are the most vulnerable, because their bodily systems are still developing and they spend many hours in their car seats.

“Car seats save lives,” said Gearhart. “It’s absolutely essential that parents put their children in them while driving, regardless of the rating a particular seat received at HealthyStuff.org.”

However, the group’s research shows that some car seats contain more harmful chemicals than others, he said.

“The best rated companies in our study, Britax and Clek, have been making great strides to produce healthier products,” Gearhart said.

The study is the fifth by the group identifying chemical hazards in car seats since 2006. HealthyStuff.org has tested 377 car seats in the last nine years.

Added flame retardant chemicals aren’t bound to the car seat materials and, therefore, are released over time, he said. Infants, toddlers, and children can be exposed through breathing in chemicals, eating them, and or absorbing them through the skin.

“This study reminds us that the lack regulation of chemicals in vehicles and vehicle components, like children's car seats, has resulted in vehicle interiors having some of the highest levels of hazardous chemicals including flame retardants,” said Andy Igrejas, director of the Safer Chemicals, Healthy Families coalition. “Yet in the face of increased consumer vigilance and activism, industry has responded by trying to exempt itself from aspects of federal regulation on chemicals. ”

For a list of car seat rankings and chemical test results, visit www.HealthyStuff.org.