Consumer group suing FDA for its failure to regulate salt 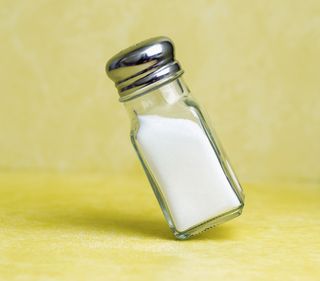 The Center for Science in the Public Interest is taking the Food and Drug Administration to federal court over the agency’s failure to act on a 10-year-old petition asking the agency to reduce the excess salt in the food supply.

The FDA’s failure to reduce the sodium in packaged and other foods is contributing to tens of thousands of premature deaths annually due to stroke, heart disease, and other health problems, the consumer advocacy group said.

“For more than 35 years, FDA has dragged its feet and refused to do anything to protect Americans from excess sodium in the food supply,” said Michael F. Jacobson, center president. “The government’s inaction condemns hundreds of thousands of Americans to early deaths due to preventable strokes and heart attacks.”

The center’s 2005 petition asked the FDA to remove salt’s status as a “generally recognized as safe,” or GRAS, substance, and to treat it as a food additive. The petition urged the agency to require food manufacturers to gradually reduce the amount of sodium in different categories of processed food and to require health messages on retail packages of table salt one-half ounce or larger.

The center has been calling on the FDA to protect Americans from excess sodium consumption for decades.

In 1978, it first urged the agency to remove salt’s GRAS status. After several years of inaction and a 1983 lawsuit by the center, the agency promised to consider additional regulatory actions to reduce sodium if the food industry failed to reduce sodium sufficiently on its own. While dismissing the center’s claim, the court indicated that the FDA would be required to make a decision on salt’s GRAS status after voluntary efforts had been given sufficient time to be assessed.

The center again sued the agency in February of 2005 for its failure to act, and the court indicated that the organization would need to re-file its petition for the court to consider the case. The petition was filed in November 2005.

Throughout the years, and especially between 2005 and 2015, Americans’ sodium intake has continued to increase – a sign that the voluntary approach urged by the FDA and the food industry has failed, the center said.

In 2007, the FDA published a Federal Register notice, offered a public hearing, and opened a comment period on center’s petition.

Since then, the agency has failed to act, the center said. The lawsuit, filed Thursday, said this delay violates the Administrative Procedure Act, which requires federal agencies to approve or deny petitions in a timely manner.

Though some food products have had modest reductions in sodium over the past 10 years, other products have even more sodium, Jacobson said.

For example, between 2012 and 2014, Chili’s increased sodium in its Loaded Baked Potato Soup by 57 percent, and Taco Bell increased the sodium in its Cheesy Nachos by 48 percent. IHOP had a 9 percent increase in sodium on 129 menu items. Its Classic Breakfast Crepes have 2,300 mg of sodium – a day’s worth of sodium.

The center said companies such as Walmart, Unilever, and Cargill have made sodium reduction a priority and achieved gains.

However, the center said, the lack of FDA action means the significant reductions for millions of people that are necessary to reduce sodium-related diseases haven’t been achieved.