Recall of the Week: Quick-release lever on front disc brakes due to crash hazard 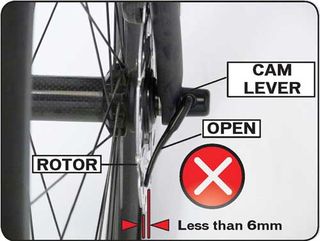 Thirteen manufacturers and distributers are recalling about 1.3 million bicycles equipped with front disc brakes and quick-release levers in the United Stated and about 245,000 in Canada and about 9,000 in Mexico.

An open quick-release lever on the bicycle’s front wheel hub can come into contact with the front disc brake rotor causing the front wheel to come to a sudden stop or separate from the bicycle, posing a risk of injury to the rider, the companies and U.S. Consumer Product Safety Commission said.

There have been three incidents reported in which an open quick-release lever came into contact with the bike's front disc brake assembly and caused the front wheel to come to a sudden stop or separate from the bicycle.

In one incident, an adult male suffered a broken finger, wrist and shoulder injuries, and abrasions. No injuries were reported in the other two incidents.

This recall involves bicycles equipped with front disc brakes and a black or silver quick-release lever on the front wheel hub. Bicycles that don’t have disc brakes aren’t included in this recall.

When the front quick-release is fully opened, if there is less than 6 mm – or the width of a #2 pencil – between the quick-release and disk brake rotor on the wheel, the bicycle is included in this recall.

A video showing how to determine if a bike is included in this recall is available at www.quickreleaserecall.com.

The recalled bicycles include the following companies, brands, and model years:

Consumers should stop using the bicycles immediately and contact the recalling company for free installation of a new quick release on the front wheel, the companies and commission said.

For more information, consumers should contact the recalling companies through their websites and call centers listed above or visit the Bicycle Product Suppliers Association Quick Release Recall website at www.quickreleaserecall.com.