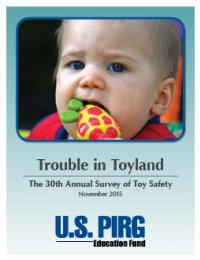 Dangerous or toxic toys can still be found on America’s store shelves, according to U.S. PIRG Education Fund’s 30th annual “Trouble in Toyland” report. Although progress has been made in toy safety, consumers need wary when shopping this holiday season, the group advises.

Laboratory testing on toys found toxic chemicals, including chromium and phthalates, which can have serious, adverse health impacts on a child’s development. The survey also found examples of toys that pose a choking hazard, loud toys that can threaten children’s hearing, and powerful toy magnets that can cause serious injuries if swallowed.

“We should be able to trust that the toys we buy are safe,” said Mike Litt, consumer advocate for U.S. PIRG. “However, until that’s the case, toy buyers need to watch out for common hazards when shopping for toys.”

For 30 years, the U.S. PIRG toy reports have led to over 150 recalls and other enforcement actions.

Key findings from the report include:

Over the past seven years, stronger rules have helped get some of the most dangerous toys and children’s products off the market, Litt said. Rules put in place by the 2008 Consumer Product Safety Improvement Act tightened lead limits and phased out dangerous phthalates.

Earlier this year, the commission began carrying out a ban on small, powerful toy magnets which is also an important step forward, he said, adding not all toys comply with the law, and holes in the toy safety net remain.

If a parent or caregiver identifies an unsafe toy, they should go to www.saferproducts.gov to report the potential safety problem to the commission.

“Our leaders and consumer watchdogs need to do more to protect our youngest consumers from the hazards of unsafe toys – no child should ever be injured, get sick, or die from playing with a dangerous toy,” said Litt. “Also, the CPSC should finalize its rule to include other toxic phthalates like DIBP on its list of banned phthalates.”

U.S. PIRG is offering a 30th anniversary blog, which highlights its toy safety work over the past 30 years.

Parents can find a list of unsafe toys, as well as tips for safe toy shopping this holiday season at toysafetytips.org.