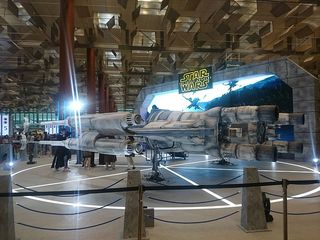 Tom Sightings of Sightings Over Sixty is the host for this week’s Best of Boomer Blogs #434.

Sightings writes about nostalgia and his thoughts on the book “The Sense of an Ending” by Julian Barnes. Barnes characterizes nostalgia as "the powerful recollection of strong emotions – and a regret that such feelings are no longer present in our lives."

One of the bloggers Sightings reports on writes nostalgically about “Star Wars” and seeing the original movie in 1977. She marveled at how the innovative film brought the classic story of good versus evil to the screen in a visually exhilarating way. She offers a post on five smart and timeless lessons from “Star Wars.”

I saw “Star Wars: The Force Awakens” Sunday. I’m on a marathon of movie watching to write my annual analysis of the Academy Awards nominated movies.

I found the latest “Star Wars” to be too violent, as most of its predecessors are. I’ll never forget taking my daughters, ages 14 and 11, to the second Star Wars movie, “The Empire Strikes Back,” in 1980. I wondered, Who thought up this junk and why are they allowed to put it on the big screen for children to see?

As early as the 1960s, studies reported that watching violence can make children more aggressive.

Movies that I’ve seen so far that are more about life than gratuitous violence are: “Spotlight” and “Bridge of Spies.” Then, there’s “The Revenant.” Terribly violent. It’s hard to understand why it received the most Academy Award nominations.

Stay tuned to my blog to read my analysis of the Academy Awards nominated movies of 2015.

Meanwhile, be sure to take a look at Sightings’ article on nostalgia, with links to what other boomer bloggers are writing about.