Home About Newsletter Categories Donate
Recall of the Week: Apple travel adapter kits and plugs due to electric shock
Baby boomer bloggers give their opinions on movies, politics, art, and travel 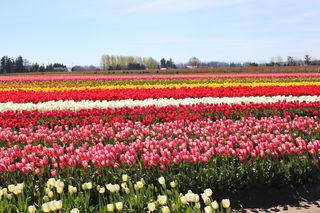 Have you launched an April Fools’ Day joke yet today? If so, how did it go? If you’ve done several, which one worked well?

One of the best jokes I ever pulled was on a co-worker. We worked on publications together. I told her that the boss said we needed to move our deadline up significantly for a project, and we were going to have to work long, extra hours. She looked absolutely stunned.

It worked well because I’m usually a serious person about work.

My daughter and grandkids enjoy April Fools’ jokes. They’ve made green milk and given wilted flowers as gifts.

Have a great April Fools’ Day. Happily, the sun is shining here, and that’s no joke.

The photo above, which I took Tuesday, is of the tulip fields in Skagit County, Washington.

Posted at 08:14 AM in Agriculture, Consumers, Holidays, Photos | Permalink | Comments (0)