Home About Newsletter Categories Donate
If you’re 50 or older, get screened for colon cancer
Best and worst things to buy in April 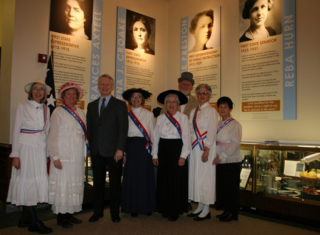 The beginnings of National Women’s History Month go back to March 8, 1857, when women from New York City factories staged a protest over working conditions.

In 1987, Congress expanded the week to a month. Each year since then, Congress has passed a resolution for Women’s History Month, and the president has issued a proclamation.

Here are some facts and figures from the U.S. Census Bureau about women:

Percentage of social scientists who were women, the heaviest representation of women among all STEM — science, technology, engineering and math — fields. Among other STEM fields, about 14 percent of engineers, 45 percent of mathematicians and statisticians, and 47 percent of life scientists were women.

Percentage of employed women 16 and over in 2014 who worked in management, business, and financial occupations, compared with 15.6 percent of employed men in the same year.

Number of women veterans in the United States in 2014.

Percentage points of increase — from 6 to 9 percent — where the wife in married couples earned at least $30,000 more than the husband between 2000 and 2015.
Source: 2014 Families and Living Arrangements table package

The amount that female year-round, full-time workers earned in 2014 for every dollar their male counterparts earned.

Estimated percent of U.S. firms that were owned by women in 2012. They constituted the majority of firms in the health care and social assistance sector, 62.5 percent; the educational services sector, 54.2 percent; and the “other services” sector, 51.8 percent. For comparison, women accounted for 51.4 percent of the 18-and-older population in the U.S. in 2012.

Percentage of female citizens 18 and older who reported voting in the 2014 election. By comparison, 40.8 percent of their male counterparts reported voting

Number of married women 18 and older — including those who were separated or had an absent spouse — in 2015.