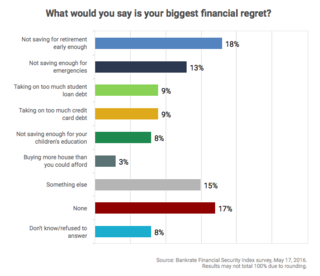 Seventy-five percent of Americans say they have financial regrets, according to a survey by Bankrate.com. Among those Americans, the regrets that top their list include, not saving for retirement early enough, 18 percent, and not saving enough money for emergency expenses, 13 percent.

Other areas that cause financial regret include taking on credit card debt, 9 percent, not saving enough for your children’s education, 8 percent, and excessive student loan debt, 9 percent.

Millennials have the most regrets about student loan debt, with 24 percent of adults under the age of 30 calling it their biggest financial regret.

Millennials’ focus on saving for emergencies shows in the survey results, as 21 percent of Millennials said their biggest financial regret was not saving enough for emergency expenses. Now, the survey shows, they’re saving more and they’re the only age group to say they’re more comfortable with their savings than one year ago.