Home About Newsletter Categories Donate
Recall of the Week: Batteries for HP and Compaq notebook computers due to fire and burn hazards
VW agrees to pay $14.7 billion to settle charges of emissions cheating

As a photojournalist, I’ve wanted for years to get a photo of the president for a book of my photos I’m preparing.

When I heard President Obama was coming to Seattle, I jumped at the chance to go to a fundraiser for Washington Governor Jay Inslee at the Washington State Convention Center at which the president would speak.

When I saw I was seated at Table 253, in the back and at the side of the ballroom, my heart sank. 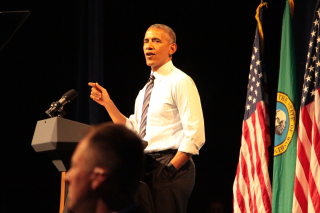 However, we were allowed to get up from our chairs when the president was on the stage. I was able to get about 20 good photos of him. 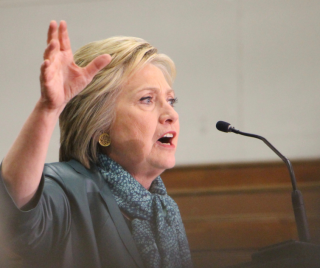 In March, when Hillary Clinton visited Seattle, I was able to get about a dozen good photos of her, so I'll have one for my book.

In “Women and the Men Who Insult Them,” blogger Meryl Baer, of Six Decades and Counting, writes about how presumptive GOP presidential nominee Trump has elevated the anti-woman and anti-a-lot-of-other-things oratory of Rush Limbaugh and his cohorts, playing to a constituency used to the harsh rhetoric.

At Heart·Soul·Mind, Carol Cassara writes about “Think Different.” Cassara said she isn’t a supporter of Donald Trump but she gets where his supporters are coming from. However, it doesn’t mean she has to accept it.

Tom Sightings at Sightings Over Sixty offers a new, tongue-in-cheek method for choosing the president in “Let’s Pick a President.” Sightings suggests following in the reality show footsteps of "Survivor," "Dancing with the Stars," or Trump's own "The Apprentice," with contests, a focus on physical attributes, a makeup challenge, and a dance contest. The audience would text in their votes over a TV show season of eight to 10 weeks.

Laura Lee Carter of the Adventures of the New Old Farts doesn’t write about politics on her blog. So she tells us she’s thinking about her midlife journey this week, from cities to feeling an overwhelming need to escape them, in an article about Richard Gere, the search for true self, and finding a sense of belonging.

Be sure to take a look at these articles and join in the conversations.