Home About Newsletter Categories Donate
Baby boomers write about life
It’s taking longer and longer for federal agencies to issue rules, but Republicans want to drag it out even more

Do you regret going to college and amassing huge student loan debt? 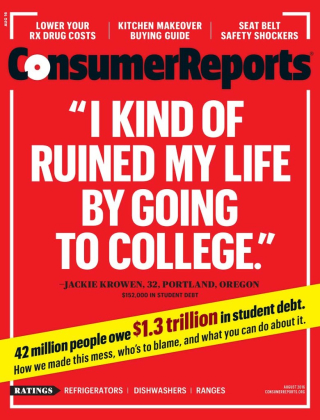 How did the nation’s growing student debt crisis, in which about 42 million people owe $1.3 trillion, occur?

Degrees of debt and regret

Because getting a college education translates into a better future and higher lifetime earnings, it should be worth the money you spend on it. But for 1,500 Americans with student debt, the burden of paying off huge loans has left many questioning whether college was worth the cost after they left, according to a survey by the Consumer Reports National Research Center.

Forty-five percent of people who are no longer in college and have student loan debt said that college wasn’t worth the cost.

Of those who said college wasn’t worth the money:

The Consumer Report’s survey showed that once people leave college, student debt impacts them in a variety of ways. For example, 44 percent cut back on day-to-day living expenses, 37 percent delayed saving for retirement or other financial goals, 28 percent delayed buying a house, 12 percent delayed marriage, and 14 percent changed careers as a result of student debt.

Consumer reports suggests “Having the College Money Talk,” in which parents and teens sit down for a discussion about family finances and create a plan so that everyone can weigh his or her options rationally when acceptance letters and student aid offers are on the table. It begins with 10 key questions:

Consumer Reports has partnered with Reveal, a nonprofit organization from The Center for Investigative Reporting, to produce a report examining student loan debt.

You can find details at ConsumerReports.org/studentdebt and RevealNews.org/studentdebt. Consumer Reports and Reveal provided separate articles by each organization, videos, infographics, survey findings, and student profiles.

In addition, the topic is the focus of Reveal’s hour-long public radio show and podcast, which begins airing on public radio stations across the country starting on Saturday, July 2, and will be available on the Reveal podcast on Monday, July 4: revealnews.org/podcast.