Recall of the Week: IKEA chests and dressers due serious tip-over hazard 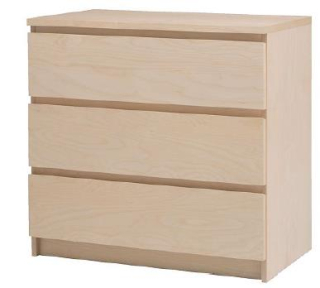 The recalled chests and dressers are unstable if they aren’t properly anchored to the wall, posing a serious tip-over and entrapment hazard that can result in death or injuries to children, the company and U.S. Consumer Product Safety Commission said.

After the July 2015 announcement, an additional death occurred.

None of the chests or dressers in these incidents had been anchored to the wall. In addition to the three deaths, IKEA received reports of 41 tip-over incidents involving the MALM chests and dressers, resulting in 17 injuries to children between the ages of 19 months and 10 years old.

A 5-digit supplier number, 4-digit date stamp, IKEA logo, country of origin, and “MALM” are printed on the underside of the top panel or inside the side panel.

Other recalled chests and dressers

Most of the non-MALM chests and dressers included in this recall are listed on the IKEA website at www.IKEA-USA.com/recallchestsanddressers.

For more information on how to receive a refund or free wall-anchoring repair kit, call IKEA at 866-856-4532 anytime or visit www.IKEA-USA.com/recallchestsanddressers or www.IKEA-USA.com and click on Product Recall.

A child dies every two weeks and a child is injured every 24 minutes in the U.S. from furniture or TVs tipping over, according to commission data.