Facts and figures for Halloween this year 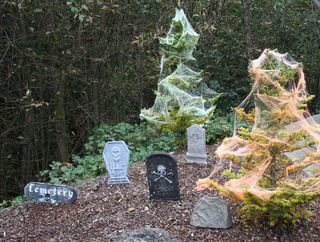 Total spending for Halloween is expected to reach $8.4 billion this year, according to a survey conducted for the American Retain Federation. It’s the high amount in the survey’s 11-year history.

U.S. consumers are expected to spend an average of $82.93, up from last year’s $74.34, with more than 171 million Americans planning to participate in Halloween festivities this year.

Consumers plan to spend $3.1 billion on costumes purchased by 67 percent of Halloween shoppers; $2.5 billion on candy, 94.3 percent; $2.4 billion on decorations, 70 percent; and $390 million on greeting cards, 35.4 percent, according to the survey.

When it comes to getting ready, 71 percent of consumers plan to hand out candy or decorate their home or yard, 49 percent; dress in costume, 47 percent; carve a pumpkin, 46 percent; throw or attend a party, 34 percent; take their children trick-or-treating, 30 percent; visit a haunted house, 21 percent; or dress their pet or pets in costume, 16 percent.

Here is information from the U.S. Census on Halloween:

The estimated number of potential trick-or-treaters in 2015 – children ages 5 to 14 - throughout the United States.

The number of acres of pumpkins harvested in the United States in 2015, with a total estimated production value of $90.2 million. Of the top six pumpkin-producing states, Illinois led the country by producing about 318.0 million pounds of pumpkins, followed by California, Ohio, Pennsylvania, Michigan, and New York.