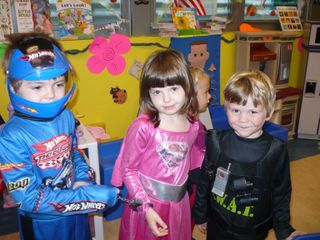 More children this year will be celebrating Halloween dressed as their favorite superhero. Princess costumes dropped to the No. 2 spot after being the top costume for 11 years, according to a survey conducted by the National Retail Federation.

Spending on Halloween costumes is expected to reach $3.1 billion, with 67 percent of those celebrating Halloween planning to purchase costumes this year.

For millennials, more than 9 percent will choose a Batman costume, 6.1 percent witch hats and brooms, and 5 percent an animal.

Older adults also are dressing up for Halloween. While most adults will select a witch or pirate costume, more than 4 percent will focus on current events such as the presidential election for their costume theme.

Sixteen percent of consumers plan to dress their pets in costume this year. Pumpkin, hot dog, and bumble bee are at the top of the list again this year.