Home About Newsletter Categories Donate
Giving Tuesday: Make sure charities are effective and watch out for scams
15 steps consumers can take to prevent infection when they’re in the hospital

Hospitals reducing infections from IV use, but more needs to be done 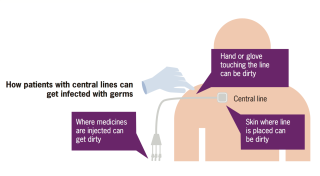 Hospitals across the country have reduced deadly, but preventable, intravenous tube infections by 50 percent since 2008. In an investigation of nearly 2,000 hospitals, Consumer Reports examined the five-year track record of teaching hospitals to see which have successfully reduced these infections, and which haven’t.

“Because teaching hospitals are teaching our next generation of physicians, we think it’s critical to monitor them closely,” said Doris Peter, Ph.D., director of the Consumer Reports Health Ratings Center. “Our review of their performance on controlling central-line infections is very sobering.”

IV tube or central line infections are highly preventable, and there are no excuses for poor performance, Peter said.

“It’s unfortunate to see so many well-known hospitals, some who tout their top rankings and awards, sitting on the sidelines of one of the biggest triumphs in patient safety,” she said.

IV tube infections come from the intravenous tubes used to supply medication, nutrients, and fluids to patients. When not handled correctly, IV tubes can become host to bacteria, pumping germs straight into the bloodstream of the patient. Then, the bacteria – including deadly strains such as MRSA that aren’t easily managed with antibiotics – can spread to the heart and other organs.

About 650,000 people develop infections after they’re admitted to hospitals each year, and 75,000 patients die, according the Centers for Disease Control and Prevention. That makes hospital acquired infections the eighth leading cause of death, just behind diabetes.

IV tube infections make up about 5 percent of all hospital infections, but are critical because:

While other hospital infections have stayed steady or declined only slightly in recent years, those linked to IV tubes were cut in half between 2008 and 2014, according to the CDC.

“Hospitals are moving in the right direction, but progress is slowing and too many hospitals have not adequately addressed the problem over the past five years,” said Peter.

Consumer Reports’ nine-page report lists the Pronovost principles developed 15 years ago to prevent IV tube infections. It also includes examples of two hospitals, Shore Medical Center in New Jersey and Mount Sinai St. Luke’s-Roosevelt in New York, that show how they successfully battled this infection, and how they continue their program and improve.

On policy, Consumer Reports has worked for more than a decade at the state level to get laws passed that require hospitals to publicly report hospital infections. And, although the Affordable Care Act included a provision that lowered Medicare payments to hospitals that had too many infections, more can be done at the federal government to give the public more timely and actionable information, said Lisa McGiffert, director of Consumer Reports’ Safe Patient Project.

“We think there are many requirements that could keep patients safe,” said McGiffert. “For example, the federal government should require hospitals to immediately report infection outbreaks or infection-control breaches to patients, healthcare providers, state and federal agencies, and the public.”

For a listing of lowest scoring U.S. teaching hospitals and those that scored the highest, click here.

Hospital lists and ratings from the report are available in the January issue of Consumer Reports and online.

Click here for an interactive tool showing hospitals in your area and their five-year track record.

For my article on how to reduce your infections when you go to the hospital, click here.