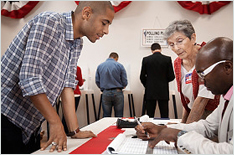 The New York Attorney General’s Office is intervening in a federal lawsuit against the New York City Board of Elections, which alleges practices used by the NYCBOE to cancel voter registrations violate federal and state laws.

The lawsuit alleges that since 2014 the NYCBOE improperly purged more than 200,000 voters’ registrations and, as a result, disenfranchised many voters during the 2016 Presidential Primary, said New York Attorney General Eric T. Schneiderman.

“The right to vote is sacred, protecting all other rights,” said Attorney General Schneiderman, adding the board’s actions undermine New Yorkers’ trust in the institutions meant to protect their rights.

The attorney general filed papers in federal court – including a proposed lawsuit– to request that the attorney general be allowed to join in a pending lawsuit against the NYCBOE, brought by Common Cause on behalf of purged voters. The Obama Administration’s U.S. Department of Justice also recently entered the lawsuit.

The attorney general’s lawsuit makes new allegations that go beyond the prior two lawsuits, detailing three separate voter purges that removed 200,000 people from the rolls. Two purges, one in 2014 and another in 2015, relate to changes of addresses, and a third was called the “Brooklyn Project.” New evidence shows violations of the law and that high-level officials at NYCBOE had knowledge of the violations, Schneiderman said.

The attorney general’s action is the result of a nine-month investigation into policies and practices for purging voter registrations. During the Presidential Primary on April 19, 2016, the Attorney General’s Office operated a hotline to troubleshoot problems voters encountered at their polling place. That day, the Attorney General’s Office received more than 1,500 complaints from citizens across New York State, including many on cancelled registrations in Brooklyn.

Last month, the attorney general released a report on the large number of statewide voter complaints the hotline received during the April Presidential Primary and General Election.

First, the NYCBOE violated federal and state laws against canceling a voter’s registration for not voting.

Beginning in early 2014, officials in the Brooklyn Office of the NYCBOE put together a plan to cancel the registrations of voters who hadn’t voted since 2008, and who hadn’t made themselves known to the NYCBOE in any other way, such as by submitting a change of address, name, or party affiliation. This plan, known in the NYCBOE as the “Brooklyn Project,” was developed in response to a report by the New York City Department of Investigation, which criticized the NYCBOE’s voter roll maintenance practices and alleged that ineligible voters remained on the NYCBOE’s registration roll. For several months in 2014, more than 20 employees worked to flag voters for cancellation based on the illegal criterion of not having voted. In 2015, NYCBOE sent intent to cancel notices and then purged nearly 117,000 voters. The timeline for the Brooklyn Project is:

In addition, officials at the Queens Borough Office illegally used the genealogy website Ancestry.com in an attempt to determine whether voters had died, and had notified senior NYCBOE officials about the practice, which still continued, he said.

The attorney general alleges that senior officials at the NYCBOE could have recognized the illegal criteria and reinstate the illegally cancelled voters before to the April 2016 Presidential Primary.

Second, the lawsuit filed by the attorney general alleges that the NYCBOE violated federal and state laws by not following proper procedures for cancelling voters based on a change of address.

The NYCBOE regularly receives information from the U.S. Postal Service’s National Change of Address database on individuals who may have changed their address. If that information suggests that a voter moved outside New York City, the NYCBOE can initiate a cancellation process. The NYCBOE is required to send that voter a notice stating that it suspects the voter has moved and that it’s seeking confirmation of the voter’s address. If the voter doesn’t respond to the notice, and doesn’t vote or confirm his or her address after two federal general elections have occurred, the NYCBOE can then cancel the voter’s registration.

In 2014 and 2015, the NYCBOE waited only 14 days after providing notice to voters before purging them from the registration roll. This illegal shortcut, developed and carried out at the Central Office of the NYCBOE, resulted in the cancellation of more than 100,000 voter registrations throughout New York City.  In addition, many voters, including several that contacted the Attorney General’s Office during the 2016 Presidential Primary, were disenfranchised by this illegal project. Timelines for the purges are: 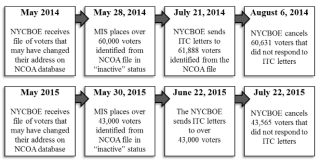 The attorney general also alleges that inadequate oversight failed to prevent these purges.

The attorney general is asking the court to order NYCBOE to audit the cancellation of voters since Jan. 1, 2014 and reinstate those wrongly purged; ensure that cancelling voters is done legally; create a training program for maintaining registration rolls; create oversight policies; appoint a new head of Voter Registration; and stop using cancellation letters to cancel registrations without documentation or evidence that a voter is ineligible.