Baby boomer bloggers write about life after the inauguration 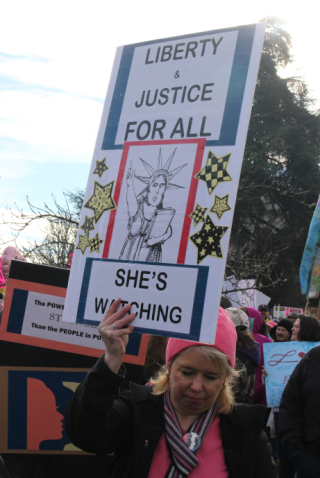 Earlier this week, I wrote about how life after Donald Trump’s election to the presidency is like falling down the rabbit hole into Wonderland. Small things blow up and get gigantic and vise versa. And, it continues.

With Friday’s announcement by President Trump to keep refugees from entering the country for 120 days and immigrants from seven predominantly Muslim nations out for three months, chaos occurred at airports throughout the country. By Saturday night, a federal judge had temporarily and partially blocked Trump's order.

What’s next? We just don’t know, but Trump will likely continue his tactics of lying and disinformation, which are routinely used in Russia.

Laura Lee Carter writes about her adventures in the Colorado “outback” and shares some of her fantastic photos.

Meryl Baer tells us about celebrating her Mom’s 92nd birthday with her family in Philadelphia.

Upsetting Carol Cassara is the way women’s clothing is sized. You can be a 12 in one store and an 8 in another. In general, she says, women’s clothes are smaller than they used to be.

I write about the New York Attorney General’s Office intervening in a federal lawsuit against the New York City Board of Elections, which alleges practices used by the board to cancel voter registrations violate federal and state laws. The lawsuit alleges that since 2014 the board improperly purged more than 200,000 voters’ registrations and, as a result, disenfranchised many voters during the 2016 Presidential Primary. I think more examples of voter suppression will be exposed. Too bad no one got to the bottom of this before Trump was inaugurated.

Cassara of Heart•Mind•Soul reports on these boomer articles for our 482nd issue of the Best of Boomer Blogs. Click here to get the links to the articles for your reading pleasure. And, be sure to join in the conversations. Baby boomer bloggers love to hear from readers.