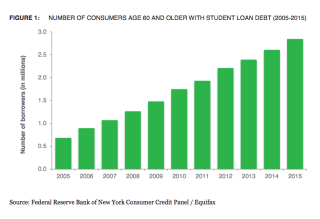 Complaints from older borrowers with student loans show that how the loans are handled can jeopardize their long-term financial security.

Student loans make up the nation’s second largest amount of consumer debt, and seniors are the fastest growing part of this debt.

About three-in-four older borrowers with student loans used them to finance their children’s or grandchildren’s college education.

Older borrowers struggling to make payments complain about obstacles to enrolling in payment plans based on their incomes and in getting their protections as cosigners, according to a Consumer Financial Protection Bureau report released Thursday.

In 2015, nearly 40 percent of federal student loan borrowers age 65 and older were in default.

Cordray said the agency is concerned that student loans are contributing to financial insecurity for many older Americans and how their loans are handled can add to their distress.

Some older borrowers struggle to repay their student loans as they juggle other debts and later-life expenses on fixed incomes with little in savings. Older consumers often have decreased income as they approach or enter retirement and experience physical and mental problems as they age. These challenges may limit their ability to keep working and reduce income.

Older student loan borrowers also carry mortgage, credit card, and auto loan debts, according to the bureau’s analysis. In addition, the bureau found older borrowers are more likely than those without outstanding student debt to skip health care expenses, such as prescription medicines or doctor visits.

According to complaints with the bureau, older consumers report problems with student loan practices such as:

The bureau’s report urges policymakers to consider how potential policy changes and market shifts, including changes to the availability of borrowing and repayment options, can affect older consumers’ long-term financial well being.

Student loan borrowers can get advice on student loan repayment options by using the bureau’s Repay Student Debt tool. Those having problems with repaying student loans or debt collection can submit a complaint to the bureau.