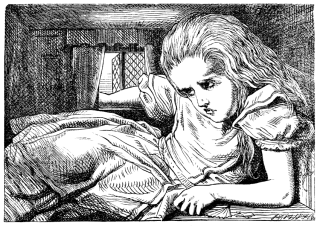 Since Donald Trump was elected president in November, I’ve felt like Alice who just fell down the rabbit hole into Wonderland.

Things are unreal, and things get bigger and smaller – without any explanation.

Journalist Luke Harding, who worked for The Guardian in Moscow for four years, shed light on Trump’s tactics during an interviewed with Terry Gross on Fresh Air, a National Public Radio program.

Harding said Russian President Vladimir Putin lies as operational strategy. The goal is to persuade some people that the Kremlin’s view of events is true, but also to confuse and bamboozle everybody else so there are 10 different explanations for an event, he said.

That what President Trump is doing – lying about events, including lying about millions of immigrants who voted illegally against him. By lying about the voting system, he’s calling into question the validity of how voters are registered and voting records are maintained. He’s setting up suspicions so Republicans in states throughout the nation can continue to enact laws that make it more difficult for low-income people to vote.

It’s astounding to me that we have a president who lies. I had hoped he’d leave the lies and disinformation, which helped him win the presidency, on the campaign trail.

To read a summary of Harding’s interview and find a link to listen the Jan. 26 program, see “Journalist: Russian’s Interference Is an ‘Assault on the Western Liberal Order.’”

Harding is author of the book “A Very Expensive Poison: The Assassination of Alexander Litvinenko and Putin’s War With the West.”

Posted at 02:00 AM in Consumers, Government, Personalities, Politics | Permalink | Comments (0)