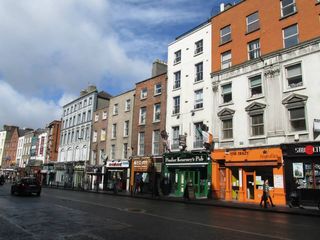 What are your plans for St. Patrick’s Day?

Originally a religious holiday to honor St. Patrick, who introduced Christianity to Ireland in the fifth century, St. Patrick’s Day has evolved into a celebration of all things Irish.

I’m looking forward to wearing my green outfit and remembering my great trip to Ireland with my daughter in 2015. We heard from a woman who shares the same Irish ancestors about research she’d done. She told us our ancestor, Henry Baylee, had lived in Kilkishen, County Clare. Lisa and I decided to go visit. See my article, “Visit to Ireland Is Magic,” for details.

Americans will spend a record amount this year to celebrate St. Patrick’s Day, with spending expected to reach $5.3 billion, according to a survey prepared for the National Retail Federation.

More than 139 million Americans plan to celebrate the Irish holiday and are expected to spend an average of $38 per person, up from last year’s $35 and a new record that tops the previous record of $37 set in 2015.

Eighty three percent of celebrants will wear green, 31 percent plan to make a special dinner, and 27 percent will go to a party at a bar or restaurant, according to the survey.

Twenty-three percent will decorate their homes or offices in an Irish theme and 15 percent will attend a private party. In addition, 15 percent are planning to attend a St. Patrick’s Day parade, especially those living in the Northeast, 21 percent.

The holiday is most popular among consumers 18-24 years old, with 77 percent celebrating, but those 25-34 will be the biggest spenders at an average of $47.

Here is information from the U.S. Census Bureau on Irishness in the United States:

The number and percentage of U.S. residents who claimed Irish ancestry in 2015. This number was more than seven times the population of Ireland, 4.6 million. Irish was the nation’s second-most frequently reported European ancestry, just after German.

The number of Irish-Americans living in Chicago in 2015, the location of one of the nation’s most famous St. Patrick’s Day traditions: dyeing the Chicago River green. Chicago’s Irish-American population was second among cities only to New York, 357,147, home to the world’s oldest and largest St. Patrick’s Day parade. Philadelphia was third at 176,725.

The percentage of people of Irish ancestry, age 25 or older, who had a bachelor’s degree or higher in 2015. In addition, 94.1 percent of Irish-Americans in this age group had at least a high school diploma. For the nation as a whole, the corresponding rates were 30.6 percent and 87.1 percent, respectively.

The percentage of householders of Irish ancestry who owned their home, with the rest renting in 2015. For the nation as a whole, the homeownership rate was 63 percent.

The number of foreign-born U.S. residents with Irish ancestry in 2015. Of these, 143,972 had become naturalized citizens.

The median age of those who claimed Irish ancestry, which was higher than U.S. residents as a whole at 37.8 years in 2015.

The percentage of the Boston metropolitan area population that claimed Irish ancestry, the highest percentage among the 50 largest metro areas in 2015.

The number of places or county subdivisions in the U.S. that share the name of Ireland’s capital, Dublin. The largest of these places in 2015 was Dublin, California, at 57,721.

The estimated number of U.S. residents who spoke Irish Gaelic.

The number of foreign-born people in 2015 who reported Ireland as their birthplace.

The value of goods imported from Ireland in 2015. Of that, the highest commodity category was Pharmaceuticals and Medicines at $25 billion.