Do you talk on your cell phone when you’re using the bathroom? 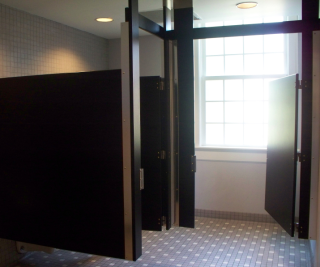 Recently, I wrote about how rude people are when they use their cell phones in public. Today, I saw another example of poor cell phone etiquette.

My daughter, niece, and I took the kids for an outing to the Pike Place Market in Seattle. It was really crowded. The crowds were dense almost everywhere, with people jamming right up against you.

We waited in line several times to use the restroom. One time, a woman was talking on her cell phone. Irritating. In the article I wrote, one suggestion for polite cell phone use is to be 10 feet away from others when you use your cell phone in public.

What happened next was astounding. The woman on the cell phone talked on the phone when she was in the bathroom stall. How awful for the person she was talking to to hear the sounds of her using the bathroom and flushing the toilet. How rude since the line of women waiting to use the bathroom was long.

One survey found that 61 percent of people admitted to using their mobile phones while going to the bathroom. That’s crazy, just plain crazy.

Other findings from the survey.

This is appalling, just appalling.

Don’t use your cell phone when you’re going to the bathroom. It’s not polite. And, in addition, it’s not sanitary.

Posted at 12:41 AM in Consumers, Health, Telecommunications | Permalink | Comments (0)