It’s the 50th Anniversary of the Summer of Love 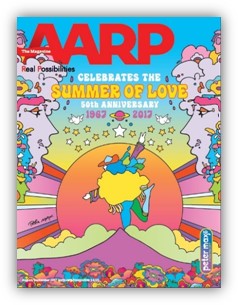 1967. It was a tremendous time for music and social activism.

About 100,000 people, mostly young people, converged in San Francisco's neighborhood Haight-Ashbury. The party lasted for three months and became known as the Summer of Love.

AARP The Magazine is celebrating the 50th anniversary of the Summer of Love with a cover featuring artwork by the artist Peter Max.

Max, 79, captured the spirit of the hippie movement with bold, colorful, graphic paintings. His artwork continued to capture American scenes in the decades since. It’s been the subject of more than 40 museum exhibits in the five decades since the Summer of Love. But it’s his work from the late 1960s, filled with euphoric rainbows and psychedelic colors that are best remembered as capturing a key moment in American history.

“The Summer of Love to me was a great period of consciousness and awareness,” Max said. “Yoga became my biggest influence. It was an amazing time for music and art as well. Hendrix, Dylan, The Who, The Dead, Ravi Shankar, The Beatles. I paint to this music all the time. I tapped into a vast creative reservoir that now just flowed forth. It was an artistic energy.”

Also in the August/September issue of AARP The Magazine, Bob Love, editor in chief, writes an essay that looks at the legacy of the Summer of Love: how its politics, music, philosophy, and creativity continue to influence America today in ways not always obvious.

The current focus on wellness, animal rights, music festivals, natural foods, and more all can be traced to those few months in the Haight/Asbury district of San Francisco, Love said.

AARP The Magazine’s August/September 2017 issue featuring Max’s artwork will be mailed to subscribers starting on August 1 and is available online at www.aarp.org/magazine.com.