Home About Newsletter Categories Donate
2016’s top consumer complaints in the U.S.
Americans taking too many prescription medications: What you can do to reduce the amount you take

EPA backs down on delay of smog rule 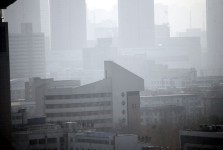 Earlier this week, a coalition of 16 attorneys general filed a lawsuit against the EPA and Pruitt over the delay. Public health, environmental, and social justice organizations also filed suit.

The EPA's reversal is an important win for the health and safety of millions of Americans directly impacted by smog pouring into their communities,” said Schneiderman.

More than 115 million Americans breathe harmful levels of smog, which often travels far distances from other states with less stringent clean air regulations, according to the American Lung Association.

The designations that will now move forward play a key role under the Clean Air Act in addressing smog's serious threat to public health, by triggering requirements for state-specific plans and deadlines to reduce pollution in designated areas, he said.

“The fight to protect public health just won a tremendous victory,” said Adrienne Esposito, executive director of Citizens Campaign for the Environment. “The public can now take a deep breath and be more assured the air we breathe will be safer. Clean air is not a luxury item it's a necessity. It is not an overstatement to say lives will be saved because of the implementation of the clean air rule.”