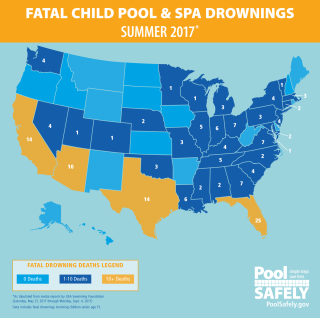 “Each one of these deaths is a tragedy, which serves as a sobering reminder of how dangerous water can be for young children,” said Ann Marie Buerkle, acting chair of the U.S. Consumer Product Safety Commission. “Even though summer is over and children are back in school, pools are still open in warm weather states and indoor swim parks. I encourage all families to Pool Safely and follow the simple steps that save lives whenever they’re enjoying time in or near the water.”

The following states had the highest number of pool and spa drownings involving children younger than 15 from Memorial Day through Labor Day 2017:

The Pool Safely campaign, a national public education campaign run by the commission, provides information on the steps that parents, caregivers, and pool owners should take to ensure that children and adults stay safer in and around pools and spas in an effort to reduce drownings. All parents and caregivers are reminded to follow Pool Safely’s simple steps to keep children safer in and around the water.

The Pool Safely campaign was launched in 2010 by the commission to raise awareness about pool and spa safety.