Home About Newsletter Categories Donate
Top 10 list of irritating things that tourists do on vacation
Baby boomers write about aging, gratitude, and grieving

Words With Friends: Addiction Over 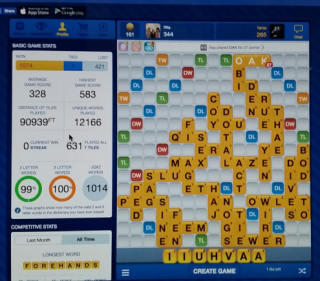 On Tuesday, I returned from my two-week vacation in Australia. It was packed with seeing the places I lived and worked in Sydney in the late 1960s and traveling to see a new city, Perth. We took eight tours in and around the two cities, including two wine tasting tours. We also spent three days taking public transportation to the places I lived and worked and the afternoon we arrived walking from our hotel to the technical college where I taught.

I didn’t have much time to play Words With Friends on the vacation, or write blog articles either. So, I decided when I returned, I’d quit playing the game. I’ve been spending an hour or two a day on it, maybe even more sometimes.

I’m visualizing all the great stuff I can get done in that time.

I’m not accepting new games and finishing up a few, such as the one above.

Years ago, I had a period when I was addicted to playing Hearts on the computer and Solitary, too. I finally had to just quit.

I certainly understand how people can get addicted to playing computer games.

When I feel stressed now, I’m going to ride on my new exercise bicycle rather than play Words With Friends.

What computer games do you play? Are you addicted to one or more?