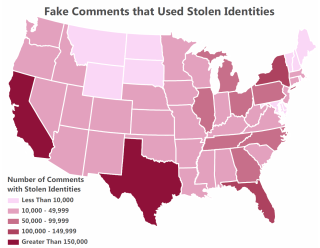 “Millions of fake comments have corrupted the FCC public process – including two million that stole the identities of real people, a crime under New York law,” said Schneiderman. “Yet the FCC is moving full steam ahead with a vote based on this corrupted process, while refusing to cooperate with an investigation.

“Moving forward with this vote would make a mockery of our public comment process and reward those who perpetrated this fraud to advance their own hidden agenda,” he said. “The FCC must postpone this vote and work with us to get to the bottom of what happened.”

Schneiderman’s latest analysis shows that as many as two million comments misused the identities of real Americans, including more than 100,000 comments per state from New York, Florida, Texas, and California. A map above shows the number of fake comments submitted using stolen identities by state.

Despite widespread evidence that the public comment process was corrupted, the FCC’s general counsel said that the agency won’t cooperate with the attorney general’s investigation into the impersonation of New Yorkers, and that it will move forward with Thursday’s scheduled vote.

In another letter to the FCC, Schneiderman addresses the excuses for refusing to cooperate with an investigation of illegal conduct that could constitute, among other violations, criminal impersonation under New York law.

“Moving forward with this vote would make a mockery of the notice and comment process mandated by the Administrative Procedure Act and reward those who perpetrated this fraud in service of their own hidden agenda,” Schneiderman wrote. “None of the assertions in your letter justify the FCC’s refusal to share evidence of who committed these illegal acts.”

Examples of reports to the Attorney General’s Office from ag.ny.gov/FakeComments –

“This person is my aunt. She never filed this. She is an elderly woman; someone is using her identification.” – Bronx, NY

“This is a 13 year old child – she did not post this comment, nor did anyone else in her household.” – Rochester, NY

“I am a service member in the United States Navy. I was… on a flight from Bahrain to Boston at the time the comments were submitted.” – Florida

“This is my elderly mother’s information. I have verified with her that she did not submit this information.” – Ft. Meyers, FL

“My LATE husband’s name was fraudulently used after a valiant battle with cancer. This unlawful act adds to my pain that someone would violate his good name.” – Los Angeles, CA

“My 96 year old World War Two veteran father…was offended by ‘the theft of [his] good name and honor.’ Someone used his name and address without his consent.” – Thousand Oaks, CA

“As a disabled Veteran and who owned his own computer repair shop and is involved in the IT community…I find this egregious.” – Old Saybrook, CT

“This fake comment is purportedly from my father. The problem is…the comment was posted more than a year AFTER HIS DEATH!!! Good luck in prosecuting whoever desecrated the memory of a Navy reservist and Seabee.” – Stratford, CT

“Please do find who did this and establish all violations possible and prosecute.” – Des Moines, IA

“This comment was made under my mom’s name. She passed away several years ago from cancer. This is sickening.” – Chicago, IL

“This is a fake filing. This isn’t the county that I served on active duty in the Marine Corps for nearly 5 years.” – Elkhart, IN

“This is a case of someone using the identity of a 13 years old minor. This is such a disgrace to the public trust.” – Lowell, IN

“I am 72 years old. I don’t understand how this happened but I am angry about it. People should be held accountable.” – Morristown, NJ

“I am filing this complaint on behalf of my mother, an elderly woman. This is definitely a false submission to the FCC.” – Red Bank, NJ

“I’m sick to my stomach knowing that somebody stole my identity and used it to push a viewpoint that I do not hold. This solidifies my stance that in no way can the FCC use the public comments as a means to justify the vote they will hold here shortly.” – Columbus, OH

“Please do something about this. This is crazy!” – Fremont, OH

“This is so outrageous. I am furious. Please investigate and prosecute.” – Chambersburg, PA

“I wasn’t sure which form to complete on my State Attorney’s website (Kansas), so I am completing your form as well as contacting him. I was horrified to see that my name was used in a comment that is opposite of my belief!” – McPherson, KS

“My father is 92 years old, was in a rehabilitation facility with a recently broken femur and I promise you, he does not know anything about net neutrality. This is definitely a fake post.” – Burnsville, MN

“This was someone commenting as my deceased father.” – Minneapolis, MN

“I am submitting this on behalf of my grandpa who is 90 years old. He absolutely did NOT write this comment.” – St. Louis, MO

“This is terrifying. Who knows what else has been said falsely under my name?” – St. Joseph, MO

“These are the kinds of actions that make the population lose faith in the system. How many deceased people ‘commented’ on this? Sickening.” – Cameron, NC

“I find it extremely sick and disrespectful to be using my deceased dad to try to make an unpopular decision look the opposite.” – Tennessee

“My step-uncle died two months before this comment was made. I am. Absolutely. Livid.” – Knoxville, TN

“It cannot stand that the American’s people information is abused in such a clear and blatant way to be used to justify unspeakable evils.” – Bay City, TX

“I hope as the Attorney General of this great state you and other states attorney generals do something about this. I do not appreciate having my name and information used without my consent.” – San Antonio, TX

“The mass misrepresentation of the people makes me sick. Please ensure my voice is not misrepresented, I am against and will continue to be against the repealing of net neutrality.” – Leesburg, VA

“I am a veteran and I should not have my name wrongfully [used].” – Hi Hat, KY

“I am filing this on behalf of my father who had two fake comments posted. He resides in VA and I have contacted our Attorney general as well.” – Virginia Beach, VA

“I am from West Virginia, but maybe you can use this information to expand the scope of the investigation. Our attorney general has not set up a form as easy to use as this one. Thank you for your service.” – West Virginia

i have a business to surving cleaning