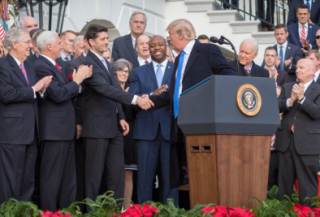 This year, there hasn’t been very much good news for consumers. One of the few positive thing I can think of is that the Affordable Care Act hasn’t been repealed and replaced – yet.

And, state governments are stepping up and filing lawsuits on behalf of consumers. Public interest and environmental groups are also fighting the Trump administration.

Here are 2017’s top consumer stories in no particular order:

1. Trump is elected president and he and his agency appointees begin dismantling consumer and environmental protections and strides made in providing health care for all. The Russians hack the U.S. presidential election and government moves so slowly nothing has been done about it yet. Then, there’s Republican attempts throughout the country, many which have been successful, to disenfranchise low-income voters who may be inclined to vote for Democrats. And, there’s Republican gerrymandering.

2. Gigantic hacks continue and it doesn’t seem that much is being done to stop them and the damage they cause consumers. This year, Equifax, 146 million consumers and Uber, 57 million customers and drivers.

3. The Trump administration and Congress roll back hundreds of federal regulations large and small, which leaves consumers even more powerless in relation to corporations. More than 1,500 proposed rules were killed before they were adopted. Trump killed the U.S. Clean Power Plan by executive order. Consumers lost net neutrality and the right to sue banks and other financial service providers in class-action lawsuits.

4. The Affordable Care Act doesn’t get repealed and replaced, although Republicans have weakened it by taking away the individual mandate.

7. More consumers are shopping on line, which is weakening the retail industry with hundreds of stores closing and even more disappointing service being offered by retailers.

8. The tax reform bill passed by Congress and signed by the president does very little for consumers while providing a windfall for corporations and their rich leaders.

10. Sexual harassment revelations cause the resignation of some very bad corporate and media executives and politicians. Hopefully, this will lead to a more positive workplace for women.

11. Still little is been done to stop the senseless violence from gun deaths. It’s hard to figure out what to say about this as the deaths go on and on.

12. Pharmaceutical companies continue to abuse American consumers with their deceitful practices. Even more egregious than their usual price gouging, off label campaigns, lies about research costs, and development of dangerous drugs is their flooding the market with opioid drugs and stopping the Drug Enforcement Agency from taking sketchy pharmacies and pill mills to court.

13. Credit card debt is at a record high while savings are at a record low. This is going to be bad for consumers when the stock market corrects or dives and the jobs market tightens.

14. Corporations continue to rip off consumers in any way they can think of. After the huge Wells Fargo scandal in 2016 in which employees set up accounts for customers without their knowledge, it was revealed in 2017 that more than 3.5 million customers who had taken out car loans with Wells Fargo were charged for auto insurance they didn’t need. Volkswagen agreed to pay $2.8 billion in criminal penalties in 2017 for rigging two classes of its diesel vehicles with software that circumvented Environmental Protection Agency testing. Earlier, the company paid about $27 billion in penalties for the emissions scandal. Two former Volkswagen officials were sentenced to prison for their role in the scheme in 2017.

I predict more of the same for much of 2018. Keep reading my blog for information on what’s going on, suggestions on how to take care of yourself as a consumer, and what groups you can join to further your consumer interests.

I think there's a mystery behind those hacks. Something we ought to know. But won't find out about easily.

You may be right about the hacks. One thing that is known for certain is that companies aren't good about reporting the hacks promptly or reporting accurately how many people have been hacked.